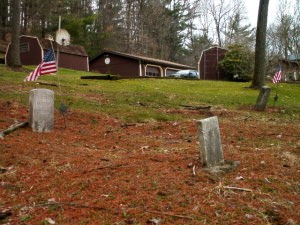 Daniel Hughes, a lumber raftsman on the Susquehanna, lived here, 1854-80.
In the years ending with the Civil War, he brought fugitive slaves here
from Maryland, protecting them before they continued north via the
Underground Railroad. Hughes gave part of his land for a cemetery, and
among those buried here are nine known African-American veterans of the
Civil War. The cemetery has borne its present name since 1936.
This area has traditionally been an African-American community, and was
renamed Freedom Road in 1900’s.  It is also a well-documented area of
Underground Railroad activity during the 1800’s.  Much of this activity
was led by a man named Daniel Hughes, who is remembered on the historical
marker bordering the cemetery.  Sometime during the Civil War, Hughes
showed his compassion in another way by giving an acre of his land to the
city for a public cemetery, which is now remembered with a historical
marker.  Hughes, died in 1880 at the age of 76, and was buried in an unmarked grave
in accordance with his beliefs.  Unfortunately, the historic home of
Daniel Hughes in the area was destroyed in a fire several years ago.