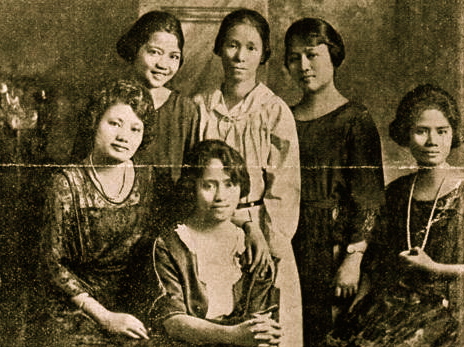 Filipino Americans: Discovering Their Past For The Future

Filipino Americans (Tagalog:Pilipino Amerikano) are Americans of Filipino descent and comprise about 3.4 million people, or 1.1% of the U.S. population. They are the country’s second-largest self-reported Asian ancestry group afterChinese Americans according to 2010 American Community Survey.

The term Filipino American is sometimes shortened to “Fil-Ams,” or “Pinoy,” Some Filipinos believe that the term Pinoy was coined by Filipinos who came to the United States to distinguish themselves from Filipinos living in the Philippines.

Filipinos in North America were first documented in the 16th century, with small settlements beginning in the 18th century.  Mass migration did not begin until the early 20th Century when the Philippines was ceded by Spain to the United States in the Treaty of Paris.  Philippine independence was recognized by the United States on July 4, 1946. Immigration was reduced significantly during the 1930’s, except for those who served in the United States Navy and increased following immigration reform in the 1960’s.

The history of Spanish and American rule and contact with merchants and traders culminated in a unique blend of Eastern and Western cultures in the Phillipines, both in appearance and culture.

Reflecting its 333 years of Spanish rule, many Filipinos adopted Hispanic surnames, and celebrate fiestas.  Some Filipinos retain Philippine surnames, such as Bacdayan or Macapagal, while others derive from Japanese, Indian, and Chinese and reflect centuries of trade with these merchants centuries preceding European and American rule.

In the United States

Filipino and English are constitutionally established as official languages in the Philippines, and Filipino is designated as the national language, with English in wide use.  Many Filipinos speak American English due to American colonial influence in the country’s education system.

Tagalog is the fifth most-spoken language in the United States, with 1.262 million speakers.  Many of California‘s public announcements and documents are translated intoTagalog.  Tagalog is also taught in some public schools, as well as in higher education.  Another significant Filipino language is Ilokano.  Ilokano is taught in some public high schools in Hawai’i and is offered as a bachelor’s degree at the University level at the University of Hawai’i at Manoa.However, fluency in native Filipino languages tends to be lost among second- and third-generation Filipino Americans.  In 2000, among U.S.-born Filipino Americans, three quarters responded that English is their primary language.

Religion in the Philippines

The Philippines is 90% Christian, one of only two such countries in Asia, along with East Timor.  Following the European discovery of the Philippines by Ferdinand Magellan, Spaniards made a concerted effort to convert Filipinos to Catholicism; outside of the Muslim Sultanates in the Philippines, missionaries were able to covert large numbers of Filipinos.  And the majority are Roman Catholic, giving Catholicism a major impact on Filipino culture.  Other denominations include Protestants (Aglipayan, Iglesia ni Cristo, and others), Muslims, or nonreligious; religion has served as a dividing factor within the Philippines and Filipino American communities.

As Filipinos began to migrate to the United States, Filipino Roman Catholics were often not embraced by their American Catholic brethren, nor were they sympathetic to a Filipino-ized Catholicism. This led to creation of ethnic-specific parishes. The first-ever American Church for Filipinos, San Lorenzo Ruiz Church in New York City, is named after the first saint from the Philippines, San Lorenzo Ruiz. This was officially designated as a church for Filipinos in July 2005, the first in the United States, and the second in the world, after a church in Rome.

Five images of the Filipino settlement at Saint Malo, Louisiana

Due to scattered living patterns, it is nearly impossible for Filipino American candidates to win an election solely based on the Filipino American vote.  Filipino American politicians have increased their visibility over the past few decades. Ben Cayetano, former governor of Hawaii, became the first governor of Filipino descent in the United States. The number of Congress-members of Filipino descent doubled to numbers not reached since 1937, two when the Philippine Islands were represented by non-voting Resident Commissioners, due to the 2000 Senatorial Election. In 2009 three Congress-members claimed at least one-eighth Filipino ethnicity; the largest number to date. Since the resignation of Senator John Ensign in 2011, (the only Filipino American to have been a member of the Senate), and Representative Steve Austria (the only Asian Pacific American Republican in the 112th Congress[49]) choosing not to seek reelection and retire, Representative Robert C. Scott is the only Filipino American in the 113th Congress. 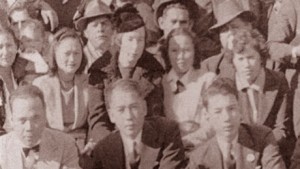 The Citizenship Retention and Re-Acquisition Act of 2003 (Republic Act No. 9225) made Filipino Americans eligible for dual citizenship in the United States and the Philippines.  Overseas suffrage was first employed in the May 2004 elections in which Philippine President Gloria Macapagal-Arroyo was reelected to a second term.

By 2005, about 6,000 people had become dual citizens of the two countries.  This act allow Filipino Americans to invest in the Philippines, through land purchases, which are limited to Filipino citizens and, with some limitations, former citizens.), vote in Philippine elections, retire in the Philippines, and participate in representing the Philippine flag. In 2013, for the Philippine general election there were 125,604 registered Filipino voters in the United States and Caribbean, of which only 13,976 voted.

Dual citizens have been recruited to participate in international sports events including athletes representing the Philippines who competed in the 2004 Olympic Games in Athens, and the Olympic Games in Beijing 2008.

The Philippine government actively encourages Filipino Americans to visit or return permanently to the Philippines via the “Balikbayan” program and to invest in the country. 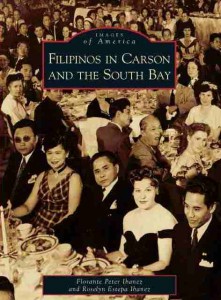 Filipinos remain one of the largest immigrant groups to date with over 40,000 arriving annually since 1979.  The United States Citizenship and Immigration Services (USCIS) has a preference system for issuing visas to non-citizen family members of U.S. citizens, with preference based generally on familial closeness. Some non-citizen relatives of U.S. citizens spend long periods on waiting lists.  Petitions for immigrant visas, particularly for siblings of previously naturalized Filipinos that date back to 1984, were not granted until 2006.  As of 2012, over 450 thousand Filipinos were on the visa wait list, second only to Mexico and after Filipinos the third is India, fourth is Vietnam and the fifth is China.  Filipinos have the longest waiting times for family reunification visas, as Filipinos disproportionately apply for family visas; this has led to visa petitions filed in July 1989 still waiting to be processed in March 2013.

Filipino Americans may be mistaken for members of other racial/ethnic groups, such as Latinos or Pacific Islanders; this may lead to “mistaken” discrimination that is not specific to Asian Americans.

In the period, prior to Philippine independence in 1946, Filipinos were taught that they were American, and presented with an idealized America.  They had official status as United States nationals.  When ill-treated and discriminated by other Americans, Filipinos were faced with the racism of that period, which undermined these ideals. Carlos Bulosan later wrote about this experience in America is in the Heart. Even Pensionados, who immigrated on government scholarships, were treated poorly. 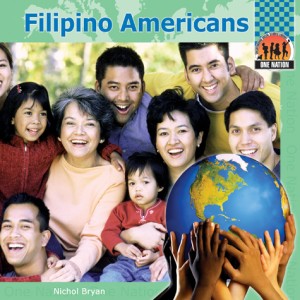 The concept is also used to describe how the ethnicity has assimilated.  Few affirmative action programs target the group although affirmative action programs rarely target Asian Americans in general.  Assimilation was easier given that the group is majority religiously Christian, fluency in English, and high levels of education.  The concept was in greater use in the past, before the post-1965 wave of arrivals.

The term has been used to describe Asian Americans as a whole, and the term “model minority” has been applied to Filipinos as well as other Asian American groups. Filipino critics allege that Filipino Americans are ignored in immigration literature and studies. 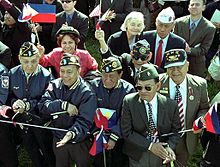 Filipino American veterans at the White House in 2003 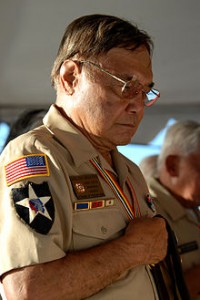 During World War II, some 250,000 to 400,000 Filipinos served in the United States Military, in units including the Philippine Scouts, Philippine Commonwealth Armyunder U.S. Command, and recognized guerrillas during the Japanese Occupation. As of January 2013, ten thousand surviving Filipino American veterans of World War II lived in the United States, and a further fourteen thousand in the Philippines, although some estimates found eighteen thousand or fewer surviving veterans.

The U.S. government promised these soldiers all of the benefits afforded to other veterans.  However, in 1946, the United States Congress passed the Rescission Act of 1946 which stripped Filipino veterans of the promised benefits. One estimate claims that monies due to these veterans for back pay and other benefits exceeds of one billion dollars.  Of the sixty-six countries allied with the United States during the war, the Philippines is the only country that did not receive military benefits from the United States.  The phrase “Second Class Veterans” has been used to describe their status.

Many Filipino veterans traveled to the United States to lobby Congress for these benefits .  Since 1993, numerous bills have been introduced in Congress to pay the benefits, but all died in committee.

Representative Hanabusa submitted legislation to award Filipino Veterans with a Congressional Gold Medal.  Known as the Filipino Veterans of World War II Congressional Gold Medal Act, it was referred to the Committee on Financial Services and the Committee on House Administration.  As of February 2012 had attracted 41 cosponsors.

There is a lawsuit to be filed by The Justice for Filipino American Veterans against the Department of Veterans Affairs.

In the late 198’0s efforts towards reinstating benefits first succeeded with the incorporation of Filipino veteran naturalization in the Immigration Act of 1990.  Over 30,000 such veterans had immigrated, with mostly American citizens, receiving benefits relating to their service.

Similar language to those bills was inserted by the Senate into the American Recovery and Reinvestment Act of 2009  which provided a one time payment of at least 9,000 USD to eligible non-US Citizens and 15,000 USD to eligible US Citizens via the Filipino Veterans Equity Compensation Fund.  These payments went to those recognized as soldiers or guerrillas or their spouses.  The list of eligibles is smaller than the list recognized by the Philippines.  Additionally, recipients had to waive all rights to possible future benefits.  As of March 2011, 42 percent (24,385) of claims had been rejected; By September 2012, that number was further reduced to some 24 thousand, using the “Missouri list” (the Approved Revised Reconstructed Guerilla Roster kept by the National Personnel Records Center (NPRC) in St Louis, MO.)

In the 113th Congress, Representative Joe Heck reintroduced his legislation to to allow documents from the Philippine government and the U.S. Army to be accepted as proof of eligibility.  Known as H.R. 481, it was referred to the Committee on Veterans’ Affairs.  In 2013, the U.S. released a previously classified report detailing guerrilla activities, including guerrilla units not on the “Missouri list.”

In September 2012, the Social Security Administration announced that non-resident Filipino World War II veterans were eligible for certain social security benefits; however an eligible veteran would lose those benefits if they visited for more than one month in a year, or immigrated.