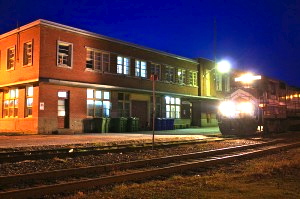 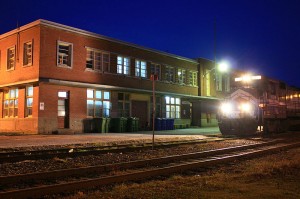 The Canadian Pacific Railway (CPR) station in Farnham Quebec is a two storey flat-roofed building constructed in 1950 to express International style design principles. It is located at 191 Victoria St. in the downtown area, just east of the junction of two railroad mainlines.

The Farnham CPR station was designated a heritage railway station for its historic, architectural and environmental importance.

This Farnham CPR station was built in 1950 to replace an earlier station on the site destroyed by fire in 1949 because Farnham occupies a critical strategic site on the CPR network. It is located at the intersection of railway lines running east/west across Canada and north/south from Canada to the United States. Construction of this station in 1950 coincided with the high point in CPR post war expansion in which the company introduced both diesel technology and a new organizational framework. Farnham became the administrative centre of the railway’s eastern region with an establishment of more than 500 employees.

Design of the new station reflected the CPR’s desire for both increased visibility and a forward-looking image. The building’s assymetrical composition was a statement reflecting the CPR’s revised program in an array of new construction materials. As a result, Farnham’s new CPR station was in the modern urban tradition, an image that identified Farnham as a progressive community.

Heritage value of the Farnham CPR station resides in the International style principles reflected in its architectural form and elements of composition which frankly express its function in a play of simple volumes devoid of classical references. Its plan bears a direct relationship to the building’s site, responding to requirements for the station’s relationship to the town, the station yard and the tracks of the two mainlines it serves.