On the Eve of President Bush’s First Trip to Africa, Democracy Now! Looks at Two Flashpoints on the Continent–Liberia and Congo on June 30, 2006

A discussion with Jacob Massaquoi, political and human rights activist in Liberia, Director of Africa Action Salih Booker and founder of the Patrice Lumumba Coalition Elombe Brath. Today is the 43rd anniversary of Congolese independence.  West African countries urged the US yesterday to join them in sending a force to stop the civil war in Liberia. The UN security council mission said it expected the world body to back intervention.  Two failed rebel assaults this month on Monrovia–the capital of Liberia–have left an estimated 700 people dead and prompted calls for a peacekeeping force from UN secretary general, Kofi Annan, Britain, France and legions of Liberians.  In the worst-hit western pockets of the city, shells still littered the streets on Saturday and homes were deserted. In other parts, thousands of people who had run from their homes crowded into ruined buildings, schools and the city stadium. This according to The New York Times.

In their makeshift camps, short on running water and sanitation facilities, Monrovians are also facing a cholera outbreak. Many arrived at clinics in wheelbarrows.  The US is under the most pressure to step in to help end the fighting having historic ties to Liberia since it was founded as a colony for freed American slaves 150 years ago.  President George W. Bush, who will make his first visit to Africa next week, called on the Liberian president, Charles Taylor, to step aside last week, but stopped short of committing U.S. forces to the effort.  On Thursday, a furious mob laid out corpses outside the U.S. embassy and screamed for American intervention to put an end to the killing.

In other news from Africa, warring sides in the Congo have agreed on the formation of a unified military–one of the last main sticking points for the country’s peace agreement. In the negotiations, the government and two main rebel groups agreed to divide major military posts between them.  The conflict has been called “Africa’s first world war,” as armies and militias from Zimbabwe, Angola, Zambia, Namibia, Rwanda, Uganda and the Kabila government fight over the vast territory and rich mineral deposits in Congo. Aid groups estimate the 5-year civil war in the central African nation have claimed over 3 million lives.  On Thursday, the UN security council extended the mandate of the UN Peacekeeping force in the Congo through July. UN Secretary General Kofi Annan has asked the Security Council to increase the peacekeeping force on the ground to over 10,000 troops.  Today is the 43rd anniversary of Congolese independence. Patrice Lumumba became the government’s first Prime Minister following the country’s independence on June 30th 1960. Within six months he was assassinated in a CIA backed coup the brought the Dictator Mubuto Sese Seko to power. 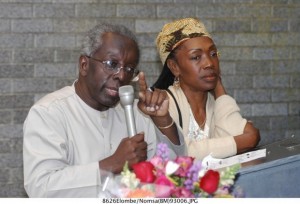 The late Elmobre Brath will be laid to rest Saturday, May 31, 2014 at 10 a.m. at the Abyssinian Baptist Church in Harlem, New York. Brath was the founding leader of the December 12th Movement. Mourners plan to gather at the Adam Clayton Powell Jr. State Office building at 8 a.m. and walk through Harlem to Abyssinian Baptist Church Saturday morning in Brath’s honor. Organizers of the walk include the Patrice Lumumba Coalition, the Freedom Party, the Black Men’s Movement and CEMOTAP. Brath passed away on May 19 in a nursing home. He was 77.