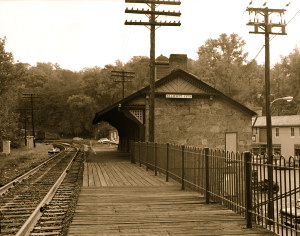 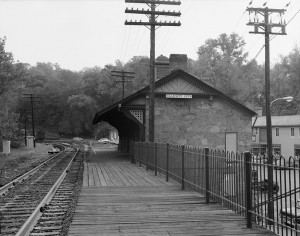 The Ellicott City Station is the oldest remaining passenger train station in the United States, and one of the oldest in the world. At the time of its construction it was the terminus of the Baltimore and Ohio Railroad line from Baltimore to Ellicott’s Mills, Maryland and it incorporated features for the servicing of steam locomotives at the end of the 13 mile (21 km) run. The station is now used as a museum.

The station was built in 1830 at the end of the Oliver Viaduct, of local stone (Ellicott City Granodiorite) provided by one of the quarries owned by the Ellicott family, which had founded the town and local flour mill in 1772. The two-story stone building is built against the viaduct. A gabled roof is topped by a wood ventilating cupola. The upper level of the station is at the level of the tracks on the viaduct.

The Oliver Viaduct was the second major stone bridge built by the railroad (after theCarrollton Viaduct). It was 123 feet (37 m) long and comprised three 20 feet (6.1 m) arches.  The viaduct was damaged by Hurricane Agnes in 1972, and has since been reconstructed.

The station building was designed to allow engines to be pulled in on the upper level so that they could be worked on from below. A turntable with a diameter of 50 feet (15 m) was fitted in 1863 to permit locomotives to be turned around. The turntable was filled in after the rail line was extended, but the granite foundations remain.

The railroad built an adjacent freight house, designed by E. Francis Baldwin, in 1885. The station is now used as a museum. 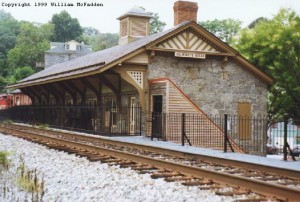 The railroad’s inaugural trip from Baltimore to Ellicott’s Mills has held on May 22, 1830, with horse-drawn rail cars. Regular passenger service began on May 24.

The B&O demonstrated its first locomotive, the Tom Thumb, at Ellicott’s Mills in a famous race against a horse later in 1830.  The railroad began using locomotives for passenger trains in 1832. 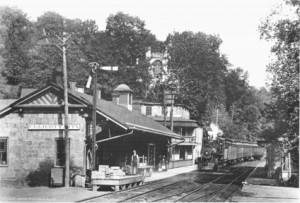 The station is significant as the terminus of the original B&O railroad. The B&O was conceived as a means of re-establishing Baltimore as a major terminus of inland commerce, a position the city had lost with the advent of the Erie Canal. The commencement of construction on the Chesapeake and Ohio Canal, originating in nearby rival Washington, D.C., gave impetus to the use of a railroad for topographically-challenged Baltimore. From Ellicott’s Mills the tracks reached Harpers Ferry, West Virginiain 1834, Cumberland, Maryland (the eventual terminus of the C&O Canal) by 1842, and Wheeling, West Virginia on the Ohio River in 1852.