You are here: Home / Education / Women Who Made History / Elizabeth Warren 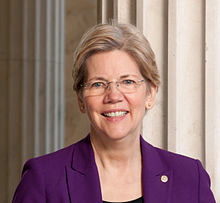 The Massachusetts senator claims bankers are making so much money because the system is rigged. 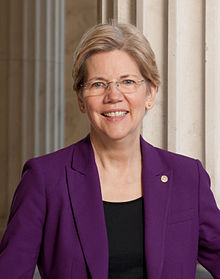 Elizabeth Ann Warren (née Herring; born June 22, 1949 is an American academic and politician, who is the senior United States Senator from Massachusetts and a member of the Democratic Party. She was previously a Harvard Law School professor specializing in bankruptcy law. Warren is an active consumer protection advocate whose work led to the conception and establishment of the U.S. Consumer Financial Protection Bureau. She has written a number of academic and popular works, and is a frequent subject of media interviews regarding the American economy and personal finance.

In the wake of the 2008 financial crisis, Warren served as chair of the Congressional Oversight Panel created to oversee the Troubled Asset Relief Program (TARP). She later served as Assistant to the President and Special Advisor to the Secretary of the Treasury for the Consumer Financial Protection Bureau under President Barack Obama. In the late 2000s, she was recognized by publications such as the National Law Journal and the Time 100 as an increasingly influential public policy figure.

In September 2011, Warren announced her candidacy for the U.S. Senate, challenging Republican incumbent Scott Brown. She won the general election on November 6, 2012, to become the first female Senator from Massachusetts. She was assigned to the Senate Special Committee on Aging; the Banking, Housing, and Urban Affairs Committee; and the Health, Education, Labor, and Pensions Committee.

Warren has been described as a leading figure among American progressives, and has frequently been mentioned by some pundits as a potential 2016 presidential candidate despite repeated statements that she has no plans to run.