The Ghosts of Elitch Theatre Trailer

The Elitch Theater in Denver Colorado has seen some of the world’s most famous performers on its stage and it is now being renovated. Which is good, because no one really knows why the building is still standing. Some believe its the ghost of Mary Elitch keeping up. This documentary is both an historical documentary about the theater as well as a ghost story. The theater has been listed as a National Treasure. This is a trailer for 30 minute piece. Visit www.elitchfilm.com to purchase a copy of the DVD.

The Historic Elitch Theatre is located at the original Elitch Gardens site in northwest Denver, Colorado. Opened in 1890, it was centerpiece of the park that was the first zoo west of Chicago. The theatre was Denver’s first professional theatre, serving as home to America’s first and oldest summer-stock theater company from 1893 until the 1960s. The first films in the western United States were shown there in 1896. Cecil B. DeMille would send yearly telegrams wishing the theater another successful season, calling it “one of the cradles of American drama.”

The theatre closed in 1991 and exterior restoration on the historic auditorium was completed in 2007. Fundraising continues for interior renovations before opening to the public. The vision is to reopen as a year-round multimedia performing arts complex for the community offering education, film, live music, and theater. 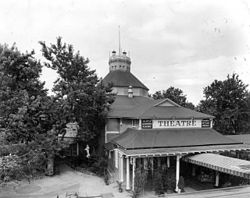 History – Elitch Theater, as it appeared in 1923

John Elitch and Mary Elitch Long first opened Elitch Gardens on May 1, 1890, with animals, bands, flowers and an open air theater where Mayor Londoner of Denver spoke.   Inspired by Shakespeare‘s Globe Theatre, the first shows were vaudeville acts by accomplished local and national performers. In 1891 the theatre was enclosed and rebuilt for $100,000. The Boston Opera Company performed musicals, and light opera starting with The Pirates of Penzance. In 1893 the first summer stock theatre company, the Norcross Company, was organized in the East and brought to the gardens. Vaudeville shows continued until 1900.

In 1896, Edison’s Vitascope was exhibited at the theatre showing the first films in Colorado.

The Elitch Gardens Stock Theatre Company began performing in 1897 under the management of Mary Elitch Long. Its first season in 1897 opened with leading man James O’Neill, who had promised John that he would act in the new theater when it was ready. The first show performed there was Helene.   The company became known for putting on ten plays in a ten-week summer season and attracting internationally known stars of the theatre and screen.

Sarah Bernhardt came to Denver in 1906 after the San Francisco earthquake destroyed the California Theatre where she was scheduled to perform. At Elitch’s she played Camille at the matinée and LaSorcier at night. Douglas Fairbanks was hired into the same company. Prior in 1905, he was hired to sweep the stage for theater tickets.

The costs of running the park became too much for Mary Elitch and with the purchase of Elitch Gardens by John Mulvihill in 1916, she stepped down from control of the Gardens and theater. However, two lower theater boxes were always reserved for her and her friends. Mulvihill oversaw the theatre until his death in 1930 and was succeeded by his son-in-law Arnold Gurtler.

In 1953, the Elitch Theatre was used for two days to film scenes for The Glenn Miller Story.

The Elitch Garden Theatre Company became its own incorporated business, separate from the Elitch Gardens Park, renting the theatre in 1963. The company stopped operating as a traditional resident summer-stock switching to single, star-packaged shows out of New York. The company had many successful years but as time and culture changed the theatre building was neglected.

The park’s Trocadero Ballroom was torn down in 1975. Fearing a similar fate, the community was able to add the theatre to the National Register of Historic Places in 1976.

The Elitch Theatre Company’s last season was in 1987. The park booked the “Incredible Acrobats of China” for a season, then one night musical acts before it was officially closed in 1991. The Robber Bridegroom was performed with Patrick Cassidy for the theatre’s centennial anniversary.   Actor Raymond Burr raised $2 million for an educational program at the theatre. The money was instead donated to local Cole Middle School.

The Elitch Gardens amusement park moved to the current central Platte Valley location in 1994. The new $94 million park was opened in 1995 with attendance reaching one million. Two fires in 1995 on the old Gardens property near the theatre cause public outcry for additional security.   The original Elitch property was sold to Perry Rose LLC in 1996 with the conditions that the theater and carousel shell never be demolished.

As of 2010, the exterior restoration of the building is complete but the interior remains unrestored.  In 2011, Barbara Medill, a friend of Mary Elitch Long’s, donated some of Long’s possessions to the Foundation, including an engraved silver place setting.   After a massive volunteer cleanup, the interior was opened for Doors Open Denver in April 2012.   Musicians and Shakespearean performers were the first acts on stage in the 22 years since the building closed. 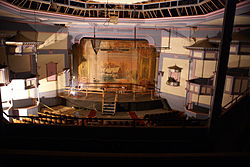 In 2006, the Historic Elitch Gardens Theatre Foundation was awarded $5 million in federal, state, city, grants and private donations. Work began on saving and restoring the historic exterior. A cement foundation was poured under the exterior walls, replacing beams resting on large stones on the bare ground. The roof, gable, main entrance/lobby, and the exterior walls were all replaced and painted. A fire suppression sprinkler system was also installed.

In 2010 the decorative historic curtain, hand painted oil on canvas (1900s), was properly taken down and stored. Generations of pigeons, cats, and foxes were evicted in 2011 as volunteers cleaned up after years of neglect. 2012 roof repairs in the fly building fix huge leaks over the stage.