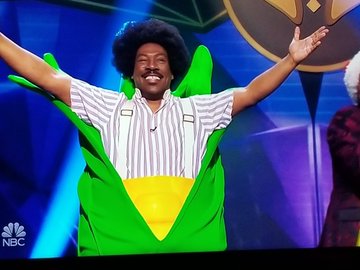 Eddie Murphy, one of SNL‘s most famous alumni, returned to the show for the first time in 35 years on Saturday, hosting the last episode of the 2010’s. For his first time back in decades, Murphy brushed off a lot of his old, iconic characters. And since 2019 is the year of the Mr. Rogers-ssance, it’s only fitting that Murphy revives his parody, “Mr. Robinson’s Neighborhood.”

“I was gone for a bit, but now I’m alright,” Murphy sings as he walks into the familiar apartment. “My neighbors was all black, but now they’re white!”

It turns out that a lot of things have happened to Mr. Robinson’s neighborhood in the years since we last saw him. But he’s eager to fill us in: “Hi, boys and girls! It’s your old pal, Mr. Robinson. So much has changed since we last spent some time together. My neighborhood has gone through so much. It’s gone through something called ‘gentrification.’Can you say ‘gentrification,’ boys and girls? It’s like a magic trick. White people pay a lot of money, and then poof, all the black people are gone.”

Gentrification, that process that forces poor and minority residents out of their neighborhoods so that developers can build luxury condos after buying up previously affordable real estate. But how has Mr. Robinson managed to hang on for so long? “That’s the word of the day: ‘squatter’s rights.’ It’s like finders-keepers but for other people’s houses.” It may not be a perfect system, but at least it lets him be a pain to the yuppie neighbors who paid over $1 million for the apartment next to his. To read more go to the link below: