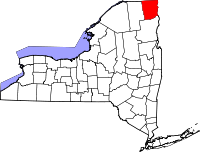 The most northern of the Champlain Valley counties, Clinton has a most ancient history, for it was from the north that the first white man came to this region. Champlain was the earliest of the French visitors from Canada, 1609, but it was not until more than a century and a half had passed that there came a certain John La Frombois, who built his house and cleared land in a section of Clinton, remaining there until the English drove him away in 1776 and burned his home. Other French colonists came, but to the English and Scotch of Canada must honor be given as the first permanent settlers of Clinton. The most of these came prior to the Revolutionary War times. Americans, new made, particularly those of “Yankee” persuasion, came in numbers in the early 1800’s.

With the development of the country rose the need for means of transportation and a great north and south thoroughfare between Montreal and New York City was opened as early as 1790, and became the great speedway of the day. Stage coaches left Montreal at sunrise, stopped the first night at Plattsburgh, left at two A. M. and arrived at the metropolis four days later. This was a great improvement upon the time made when there was no cleared road. But the use made of the lake when steam navigation began in 1809 with the second successful steamer ever built in this country, was even more an epoch in transportation.

Previously it had taken three weeks to navigate the 300 miles of Champlain with sail. John and James Winans had laid the keel of a steam vessel in 1807, which two years later made her maiden trip. The “Vermont,” for such was the steamer named, resembled Fulton’s “Clermont,” but was shaped more like a canal boat and fully decked. A cabin twenty-eight feet long by eighteen served with its side berths for sleeping and dining quarters. She was expected to make the circuit of the lake in a day, but even though she sometimes took a week, it was better than three.

The great retarding fact in the growth of the county, inaccessibility was not fully overcome until a railroad was built through its territory. The first train in America was run in 1831, but as early as 1833 Clinton County was organizing a company known as “The Great Ausable Railroad Company.” Even more elaborate were the plans made in 1837 for a covered railroad to run from Ogdensburg to Boston, thereby giving the Great Lakes access to the seaboard, which the snow could not halt. Whether this grandiose idea led to the agitation for the “Great Northern” Railroad is unknown, but this scheme did not prove visionary. The road was pushed through, but very carefully avoided Plattsburgh, for fear a competing line might be laid down the lake and thus divert trade from Boston.

Agitation for a road on the west shore of Champlain began in 1847, but by a series of unfortunate happenings nothing was done until after the Civil War. Since then several railroads have pushed their way into the county, of which the Delaware and Hudson Canal Company is the foremost.

The organization of Clinton as a county was made March 7, 1788, from Washington. New York claimed all the territory on both sides of Lake Champlain until 1890, when an act gave Vermont the eastern shore, including many islands. The county as originally formed covered most of the north country from the Lake to the St. Lawrence River, but from it was taken, in 1799, Essex County; St. Lawrence, in 1802; and Franklin, in 1808. The present area of the county is 1,049 square miles; is bounded on the north by Canada; on the east by Lake Champlain; on the south by Essex; and on the west by Franklin.