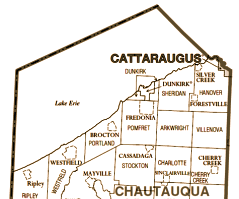 The extreme western county, Chautauqua, has Pennsylvania on its south and part of the west lines; Lake Erie to the west and north; while Cattaraugus bounds it to the east. It is a large district, 1,099 square miles, larger than one of the States, larger than some of the European countries, and yet less than half the size of one the New York State counties. Chautauqua has a terrain more varied than some States or countries, with climates and productions as varied as its surface. The lake shore, or belt, of low altitude, has the softened delayed autumn and the nearly frost free spring. And the fruits, grains and vegetables raised in the section have an earliness and belong to classes of a much more temperate region. There are relics among the lake shore trees of woods that rightly belong to southern species. From the shore belt to the interior Iakes reigns another climate, and among the highlands of the southeast, where there are summits 2,500 feet, the severe climate of the mountains rules and the residents must be content with the short hard winter and to grow crops which have hardiness.

Chautauqua County is known throughout the world as a result of its Chautauqua Institution. Thousands have gathered yearly at this assembly and spread a knowledge of this part of New York. The long, narrow lake, the home of the Institution, is only eight miles from Lake Erie, and yet 726 feet above it. One almost expects its waters to creep over the brink and rush down to the greater body; instead, it flows by a devious, route into the Gulf of Mexico. Much has been written lauding the Chautanqua country, the lake, its assembly; it has a potent charm for the visitor who comes here for rest, study, love of the beautiful, or recreation.

The situation of the county on Lake Erie, the rolling, changing character of its area, the great variety of its soils, brought about by the forces of the Glacial Period, all conspire to make Chautauqua a leader among the agricultural counties of the State. The least fertile of its lands has been planted to grapes; still the county is the greatest grape growing section in the United States. In 1920 there were 35, ooo acres in vineries, from which was harvested 69,494,394 pounds of grapes. It is second in the quantity of currants produced; fourth in poultry; second in the total value of all crops ($14,983,216). With one exception, more orchard fruits were shipped from the county than any other; in strawberries, a side line, only two counties picked more. And still the county’s rural prosperity rests upon its dairies and vegetable farms rather than on fruits.

Chautauqua’s standing in industry must not be overlooked, nor the fact that two-thirds of her population are urban. In 1920 the number of manufacturing establishments in the county was 463, the number employed 17,000, and the value of the products $95,340,353. Jamestown was, of course, the leader, with Dunkirk second. But Falconer, with its worsted mills, Fredonia with its manufacturing plants, Silver Creek with its specialty factories, and Westfield, known everywhere for its grape juice, all swelled the total of the productions.

Historically, the county goes back, as far as the white race is concerned, to La Salle, who in 1679 sailed his little “Griffin” past the forested shore of Chautauqua. Returning two years later, he stopped for a time on the shores of Lake Chautauqua. Prior to this time the Erie Indians had roamed the region, but had been destroyed as a tribe by the Iroquois, in 1656. And back of the Eries is the evidence of the many mounds uncovered in the county, indicating some unknown race had its homes in this section.

The French gave the name Tchadakoin to the lake within the district, which if pronounced according to the rules of French ortheopy, sounds much like Chautauqua. The Holland Company, in a map of 1804, spelled the word Chautaughque; in 1859 the present spelling was first used.

The Eries, or their conquerors, the Senecas, were the owners of the county previous to the coming of the whites. The French claimed the territory by right of discovery by La Salle. These rights she ceded to England, in 1763. The Province of Massachusetts, incorporated in 1691, covered the larger part of the district, and even Connecticut owned a “two minute” strip along the southern border. And New York and Pennsylvania also had their claims. The claim of Massachusetts was settled in 1791, the Pennsylvania lines were arranged in 1787; the Indian titles were disposed of in 1797 and 1824. The Holland Company became the final owners and the attempt was made to colonize the region.

Aside from the French, the first white sojourner in the county was a rather inconstant wanderer by the name of Sawtell, who built his cabin in the district in 1796. On the 4th of July during that same year, a party of surveyors, consisting of fifty-two persons, reached Ohio by the way of Lake Erie. Among them were Augustus Porter, Seth Pease and Wareham Shepherd, all future settlers in Chautauqua. A man by the name of Skinner opened a tavern in the county in 1800; between Sawtell and Skinner lies the honor of being the first settler of Chautauqua. A rude road was built into the section in I802, and the tide of immigrants which soon flooded the region started about this time.

Chautanqua as a town was erected April 15, 1805, including all the present area of the county, except the tenth range of the Holland townships. On March 11, 1808, it was made a county.