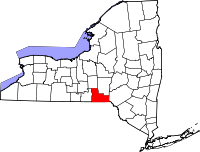 The greatest real estate transfer in New York State history was that of Fort Stanwix November 5, 1768. After a long session with the Iroquois, an agreement was reached by the English and Indians, by which all the territory east of line starting near the fort was sold to George III of England for $50,000, a sum which he thought “very unreasonable.” According to this line the area now called Broome County was for the most part, at that date, Indian country. Not until after the Revolution can this region be said to “white,” for the Indians then paid this as the great price for fighting on the wrong side in that difficulty.

The region was by no means unknown or undesired before this relatively late date. One of the great Indian trails ran along the Susquehanna, and several of minor import met or crossed this at the confluence of the Chemung and Susquehanna. In their journeys the white man followed these trails when on foot, for be it remembered they were narrow foot-paths, well-worn and clear, but made by those who walked and carried their own burdens. These white wanderers no doubt told of the beauties of this valley. But it was the stories told by the soldiers of Sullivan’s army, which made its way through this section on its march to the Genesee that brought about the influx of settlers a few years later.

In 1779 Congress authorized a movement to stop the Indian raids on the Continental frontiers. General Sullivan was placed at the head of the invading army. General Clinton, with headquarters on Lake Otsego, was to join him at a given spot. He reached the present site of Binghamton and met Sullivan not far from here, and the juncture was memorialized in the name of the town which is now located there, Union. The account of this forerunner of “Sherman’s march to the sea,” may be found elsewhere. Enough for this local history that the men of these combined armies became acquainted with the Broome region, with the result that among the settlers who came just before the end of the century were to be found the names of many who served in that carnpaign and, no doubt, many of the others came because of their commendations.

There are few lovelier parts of New York State or ones with a greater variety of surface than Broome County. The Susquehanna flows through it, and the Delaware skirts the eastern boundary for a space. The Chenango joins the larger river, and the Otselic, Tioughnioga, Nanticoke, all traverse some part of the district. This makes for many valleys with the valley fertility of soil. Even the hilly sections are not rugged wastes, but soft crowned heights that are cultivated to their tops when thus the farmer wishes.

There are no minerals of value, although stone of good quality has been quarried at different places and times. The ancient forest, the pioneer’s first resource and source of his greatest labors, was of many kinds of trees, with quantities of useful hardwoods. The soils, as they were uncovered by the pioneer, proved to be easy of cultivation and capable of growing almost any crop he cared to plant. The course of agriculture has undergone the usual changes which are determined, not by the possibilities of the soil, but the surety of a good market. The grains which made up the principal crop until 1850, has been displaced by hay; general farming has given way to dairying. Some 5,ooo acres were in fruit (1920), there were 45,428 dairy animals and 161,220 chickens in the county in the same year.

The pioneer built his gristmill almost before he had the grain to grind, the timber called for the saw, the skins of both wild animals and the cattle he killed for meat created a demand for tanneries, and the sheep which were imported almost from the first, developed woolen mills. But little did these early industries hint of the thousand factories which were to be the great sources of prosperity in this later century. Broome has been called the “Valley of Opportunity.” It has great factories, some of which are only larger editions of the original works. It has the transportation facilities with three of the great railroads crossing it. Coal, iron, materials of all sorts are at its doors, and the same gateway to them is the outlet for finished products.