You are here: Home / Education / Politics / US Politics / Day 2 of Impeachment Testimony: 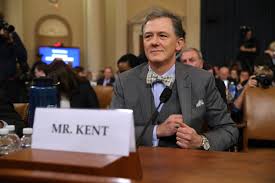 Marie Yovanovitch, the former U.S. ambassador to Ukraine who was ousted from her position, is scheduled to testify Friday in a public hearing as part of the impeachment inquiry against President Donald Trump.

The hearing is scheduled to begin at 9 a.m. ET. Watch live in the video player.

The hearing comes the same week that two other diplomats--George Kent and William Taylor–testified that they believed Trump’s personal lawyer, Rudy Giuliani, tried to dig up dirt on former vice president and 2020 presidential candidate Joe Biden and his son, Hunter.

Kent testified that Giuliani also orchestrated a smear campaign against Yovanovitch in an attempt to force her out. The impeachment probe has entered a new, public phase and centers on Trump’s dealings with Ukraine—particularly a July phone call in which he asked Ukraine’s president to investigate the Bidens. To learn more go to the link below: