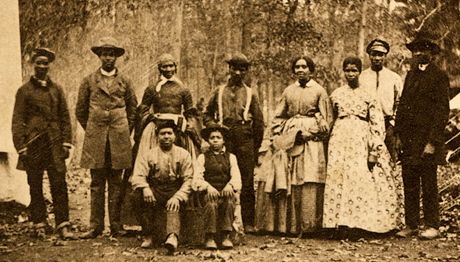 A independent filmmaker and a Civil War re-enactor are trying to change the way African-American children think about their history and themselves with a film that offers what the textbooks are missing.February 01, 2010|By Daphne Sashin, Orlando Sentinel

Filling the Gap: Forgotten Chapter of American History highlights the triumphs by blacks during the late 1800’s as engineers, spies, artisans and inventors some as young as 9 years old who in their own way helped develop the U.S. economy or secure victory for the Union army.

“Kids think that with the exception of a few well-known blacks, everyone was in the field picking cotton, they were enslaved, they were beaten, they were treated wrongly. That is a fact, but we were still doing some wonderful things,” director Tyrone Young said. “We were able to rise above chains and bondage because of the gift and talents that we have.”

He moved to Orlando in 2000 to work for The Grand Ole Opry television series producer Albert Gannaway. When Gannaway had a stroke, Young stayed on the east Coast to look after his mentor and began picking up production work in Orlando.

Educational docudramas the sort common to the History Channel were not his genre.  But when he met Civil War re-enactor Mary Fears at an annual re-enactment of the Civil War Battle of Olustee outside Lake City, Young became engrossed in her stories.

“She said, ‘You’re a young black man. You need to know about your ancestors,'” said Young, who was filming the re-enactment for a travel commercial. “She was telling me about these fantastic things our ancestors had done, and I had no idea we were a huge part of the Civil War.”

In the couple of months since its release, educators across the state have bought the film to use as a teaching tool. In doing so, the film’s creators say, educators acknowledge that lessons about the Civil War have traditionally emphasized the cruelty of slavery but failed to highlight positive contributions by blacks.

“Black people feel neglected in their history … and they are not proud of what they do read,” said film co-producer Mary Fears, 79, a retired school media specialist and a storyteller in Daytona Beach.

The film is timely given a statewide panel’s recent finding that most Florida school districts have failed to adequately infuse black history in their teachings. Only Volusia and seven other school districts have met the standards of the state’s Task Force on African American History, which the state Legislature created to determine whether schools were following a law requiring they teach the history of blacks and their “contributions to society.

In one of many endorsements received by the filmmakers, Patrick Coggins, director of multicultural education at Stetson University and a member of the task force, said their work was “the best depiction of African-American history during a bleak and sad period of American history,” and was needed in every school.

Fears said she felt cheated by the textbooks for a long time. Her own study of history and her ancestry had led her to discover prominent blacks missing from school lessons, such as Susie King Taylor, a black Civil War nurse who taught black soldiers to read and write and chronicled her life in a 1902 memoir.

She and Young came up with the idea of using actors, re-enactors and students to tell the true but untold stories of prominent blacks during that era.

The film features Thomas Day, a free black cabinetmaker who went on to operate the largest cabinet shop in North Carolina in 1850, and a slave potter known simply as Dave, who put words of poetry on the sides of his pots. It tells the story of 16-year-old steam-engine maker Benjamin Bradley, who never received a patent because of his slave status but could buy his freedom with the $1,000 he got for his invention.

“People aren’t going to cringe and feel uncomfortable. Everyone blacks, whites is going to be proud of this nation, because they see a part of us they’ve never seen before,” Young said.

Lake, Osceola, Volusia, Flagler and Marion county school districts have bought the film, and Orange County school officials and others have been invited to a private screening this month at the Orlando Museum of Art.

Volusia social-studies curriculum specialist Jason Caros, who has worked with Fears for many years, appears in an introduction to the film.

Caros said he anticipated many teachers would use the film as a tool throughout the year in various subjects, not just in February for Black History Month. One of the criticisms of the task force was that too many districts have limited their coverage of African-American contributions to token lessons during Black History Month, rather than infusing it throughout the curriculum.

“Although you want to highlight black history during that month, because that is a commemorative month, you don’t want students to get the idea that’s the only time it should be taught,” Caros said. “It should be taught throughout the year.”

The film did air on Feb. 10, 2012 on WDSC-TV (PBS) Channel 15, to get more information about Tyrone Young and his works reach out to Jaclyn R. Patellis, Executive Marketing Director, Essence of History, LLC and Ph: 321.293.420 EssenceofHistory.edu@gmail.com.