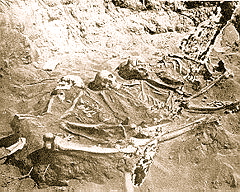 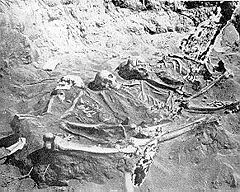 Skeletons of 3 warriors pierced by arrows uncovered at Burial Ridge.

Burial Ridge is a Native American archaeological site and burial ground located at Ward’s Point – a bluff overlooking Raritan Bay in what is today the Tottenville section of Staten Island. The first documented evidence of Paleo-Indians using the site is from the end of the Early Archaic Period 8,000 years ago.  The burial ground – used by the Lenape dating from the Woodland period until relinquishing Staten Island to the Dutch – is the largest pre-European burial ground in New York City and is today unmarked and lies today within Conference House Park.

Evidence of prior Native American habitation is still visible along the beach at the lowest elevations of the bluff where erosion exposes the remains of large shell middens dominated by shells of the Eastern oyster (Crassostrea virginica).

Bodies have been reported unearthed at Burial Ridge during various periods in the nineteenth century from 1858 onward. After conducting independent research which included unearthing bodies interred at the site, ethnologist and archaeologist, George H. Pepper, was contracted in 1895 to conduct paid archaeological research at Burial Ridge by the American Museum of Natural History. 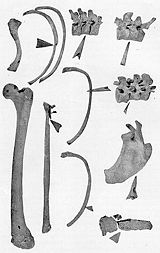 Bones pierced by arrowheads from skeletons unearthed at Burial Ridge.

Many of the skeletons unearthed were buried in flexed positions with the knees drawn up to the chest, fewer were found in a laid out position. Most of the graves were fairly shallow, ranging from 1 – 3 ft. in depth from grade. Many of the graves contained assorted grave goods, among them arrowheads and various stone implements such as ax heads and hammerstones.

One of the burials contained the skeletons of three males, with the bones pierced by 23 arrowheads made of bone, antler, argillite and flint.

In close proximity to the three males, the body of a child was unearthed with a variety of grave goods including pendants made of yellow jasper and various utensils, the body also showed evidence of copper salts about the lower portion of the skull, mandible and sternum, which indicated that copper ornaments were buried with the body. An additional skeleton unearthed in a prone position was completely charred above the knees suggesting he may have been burned alive while tied to a stake.