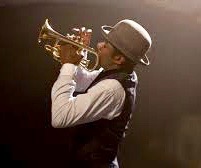 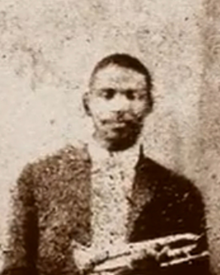 Charles Joseph “Buddy” Bolden (September 6, 1877 – November 4, 1931) was an African-American cornetist who was regarded by contemporaries as a key figure in the development of a New Orleans style of ragtime music, or “jass,” which later came to be known as jazz.

Bolden’s father, Westmore Bolden, worked as a “driver” for William Walker, the former master of Buddy’s grandfather Gustavus Bolden (who died in 1866) at the time of Buddy’s birth; his mother, Alice (née Harris), was 18 on August 14, 1873, when she married Westmore (who was around 25 at the time, as records indicate he was 19 in August 1866). His father died when Buddy was six, after which the boy lived with his mother and family members. In records of the period the family name is variously spelled Bolen, Bolding, Boldan, and Bolden, thus complicating research.  Buddy likely attended Fisk School in New Orleans, though evidence is circumstantial, as early records of this and other local schools are missing.

Bolden was known as “King” Bolden (see Jazz royalty), and his band was popular in New Orleans from around 1900 to 1907. He was known for his loud sound and improvisational skills, and his style had an impact on younger musicians. Bolden’s trombonist Willie Cornish (among others) recalled making phonograph cylinder recordings with the Bolden band, but there are no known surviving copies. 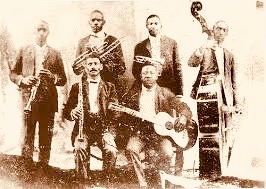 Many early jazz musicians credited Bolden and his bandmates with having originated what came to be known as jazz, though the term was not in common musical use until after the era of Bolden’s prominence. At least one writer has labeled Bolden the father of jazz.  He is credited with creating a looser, more improvised version of ragtime and adding blues; Bolden’s band was said to be the first to have brass instruments play the blues. He was also said to have adapted ideas from gospel music heard in uptown African-American Baptist churches.

Instead of imitating other cornetists, Bolden played music he heard “by ear” and adapted it to his horn. In doing so, he created an exciting and novel fusion of ragtime, black sacred music, marching-band music, and rural blues. He rearranged the typical New Orleans dance band of the time to better accommodate the blues: string instruments became the rhythm section, and the front-line instruments were clarinets, trombones, and Bolden’s cornet. Bolden was known for his powerful, loud, “wide open” playing style. Joe “King” Oliver, Freddie Keppard, Bunk Johnson, and other early New Orleans jazz musicians were directly inspired by his playing. 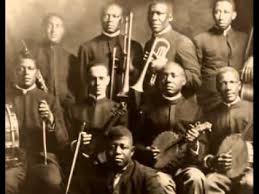 No known recordings of Bolden have survived. His trombonist Willy Cornish asserted that Bolden’s band had made at least one phonograph cylinder in the late 1890’s. Three other old-time New Orleans musicians, George Baquet, Alphonse Picou and Bob Lyons also remembered a recording session (“Turkey in the Straw,,” according to Baquet) in the early 1900s. The researcher Tim Brooks believes that these cylinders, if they existed, may have been privately recorded for local music dealers and were never commercially distributed.

Some of the songs first associated with his band, such as the traditional song “Careless Love” and “My Bucket’s Got a Hole in It“, are still standards. Bolden often closed his shows with the original number “Get Out of Here and Go Home”, although for more “polite” gigs, the last number would be “Home! Sweet Home!“

One of the most famous Bolden numbers is “Funky Butt” (later known as “Buddy Bolden’s Blues”), which represents one of the earliest references to the concept of funk in popular music. Bolden’s “Funky Butt” was, as Danny Barker once put it, a reference to the olfactory effect of an auditorium packed full of sweaty people “dancing close together and belly rubbing.” “Funky Butt” was one of many in the Bolden repertory with rude or off-color lyrics popular in some of the rougher places where he played; Bolden’s trombonist Willy Cornish claimed authorship. It became so well known as a rude song that even whistling the melody on a public street was considered offensive. The melody was incorporated into an early published ragtime number, “St. Louis Tickle.”

Bolden is also credited with the invention of the “Big Four”, a key rhythmic innovation on the marching band beat, which gave embryonic jazz much more room for individual improvisation. As Wynton Marsalis explains, the big four (below) was the first syncopated bass drum pattern to deviate from the standard on-the-beat march. The second half of the Big Four is the pattern commonly known as the hambone rhythm developed from sub-Saharan African music traditions. Go and learn more about Buddy Bolden out in movie now and to read more about Mr. Bolden go to the link below: