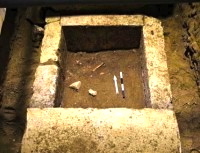 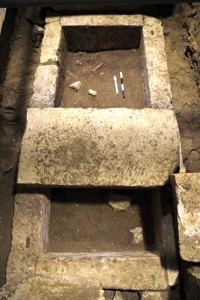 Skeletal remains have been discovered inside a lavish burial complex in Greece that dates back to the era of Alexander the Great. The tomb is thought to be the largest of its kind in the Greek world, and the bone fragments could help solve the mystery of who was buried inside.

Excitement has been building for months as archaeologists venture deeper inside the 4th century B.C. burial complex in Amphipolis, a city in Greece’s central Macedonia region, located about 65 miles (105 kilometers) east of Thessaloniki. The excavators have found sphinxes, a stunning mosaic floor and artfully crafted female statues standing guard at an interior doorway. But until now, they had not found any trace of a body. 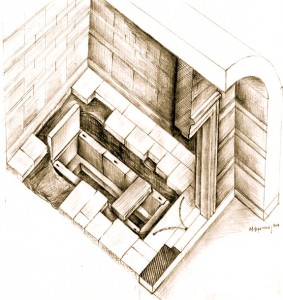 The burial vault was buried under the floor of the third chamber in the tomb. Credit: Greek Ministry of Culture

The body had apparently been placed within a wooden coffin inside a limestone vault. The archaeologists also discovered metal nails and fragments of glass scattered among the bits of bone.
The excavators, led by Greek archaeologist Katerina Peristeri, have been trying to stave off speculation about who might be buried inside the tomb. But, they said today the complex was probably too expensive to have been bankrolled by a single individual. The size and rich details of the tomb suggest it must have been built for a “prominent figure,” according to a statement from the Greek Ministry of Culture.

In September, the head of the Ministry of Culture, Kostas Tasoulas, said it was highly unlikely that the Amphipolis tomb belonged to Alexander the Great himself, but he later retreated from that statement.

Alexander the Great died in Babylon (present-day Iraq) in 323 B.C. Against his last wishes to be thrown into a river, Alexander’s generals eventually buried him in Egypt, but the exact location of his final resting place has been lost to history, Archaeology magazine reported.

Excavations have been going on at the so-called Kasta Hill site since 2012, but the dig gained widespread attention this past August after a pair of broken sphinxes were revealed at the entrance to the tomb, which is enclosed by a marble wall that runs about 1,600 feet (490 meters) around the perimeter. Among the more remarkable finds from the excavation was a colorful mosaic floor showing a scene from Greek mythology: the goddess Persephone being abducted by Hades and taken to the underworld.