Blacks on the Mountain 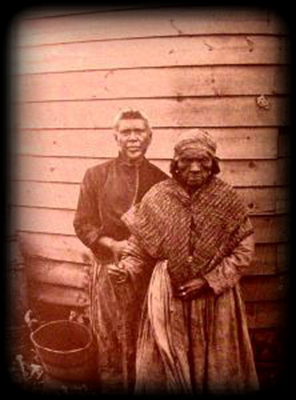 It was not until 1821 that New Jersey passed the first of several laws that abolished slavery by stages. Even the law of 1846 that made all slaves apprentices was virtually a form of slavery: i.e. they had such rights as giving consent to the sale of their persons, while their children, although free, were bound out for service after six years of age. Until circa 1850 slavery was widespread, notably among the Dutch, Prosperous farmers generally owned from one to four or five slaves to work their plantations, while tradesmen, too, sometimes had a slave or two: Silvia Dubois, for example, was born on March 5, 1768, in the hotel/tavern at Rock Mill (Zion) operated by Richard Compton.

Silvia and her youngest daughter, Elizabeth, with whom she was living with in 1883 when C.W. Larison interviewed her, were known to Mountain residents as Old Syl and Big Lib. Big Lib, or Lizi, told fortunes and was believed to be able to communicate by means of witchcraft with the spirit world. Here is the recollection of one aged man (TST-A 6/10/1917):

“Big Lib was equally a marked character. She had half
the countryside coming to her to have their fortunes told,
to discover buried treasure, to indicate veins of water by
means of her diving rod, to recover lost goods and so on.
on Saturday and Sunday afternoons all sorts of equipages
stood in ranks before her door, their occupants waiting their turn.”

Mother and daughter were thus looked on by many with awe, but not by F.T. Skillman (1953):

There was nothing romantic about them, they just managed to get a good living with an old greasy pack of cards out of those that did work. They seemed to be able to always show up at killing time and get a supply of fresh meat given them.

Silvia Dubois, for example, was born on March 5, 1768, in the hotel/tavern at Rock Mill (Zion) operated by Richard Compton. It had been located on property that in 1883 was owned by Richard Scott, which maps of the era show to have been on Montgomery Road just north of Cat Tail Bridge. Her father, Cuffy Bard, and grandfather, Harry Compton (Harry Put), were fifers during the Revolution. In her old age she used to regale open-mouthed young listeners with her recollections of the Revolution. One impressionable member of the audience remembers her as saying she was working at Hunt House when the great war council was held there in June of 1778:

“I myself have heard her describe the appearance of the General
and his officers, the uniforms and colors of the regiments, their
dispositions, etc., with such particularity as to prove her an eye-
witness of the scenes described”

Although Silvias presence at Hunt House may be doubted (she would have been only ten years old), her knowledge of Revolutionary military dress may, have been accurate or nearly so, given the participation of her owner, father and grandfather in the conflict.

When Dorcas Compton, Silvias mother, because the slave of Minical Dubois, she felt that Dobois mistreated her, and because the law of New Jersey, according to Silvia, allowed a slave who did not get along with his master to find a new one, Dorcas did just that. Of course, I remained a slave to Minical Dobois, Silvia told C.W. Larison matter-of-factly (PR 1980). Dubois treated Silvia well. But his wife proved extremely cruel, sometimes attacking Silvia with anything she could lay her hands on. Once she kicked her in the stomach and once broke her skull with a fire shovel, using such force that the indentation stayed with Silvia to the end of her days. When the Duboiss moved to Great Bend on the Susquehanna in northern Pennsylvania, where they operated a tavern, Silvia went with them. Once day, when the mistress slapped her for not scrubbing the barroom floor properly, Silvias patience snapped. She struck back with her fists, sending her mistress crashing into the wooden panels of the barroom door (PR 1908).

The barroom was full of folks They wee gong to
take her part, of course; but I just set down the slop
bucket and straightened up and smacked my fists at them
and told them to wade in if they dared, and I’d thrash every
devil of them. And there wasnt a dammed one that dared
to come. Then I got out, and pretty quick, too.

Dubois, realizing that Silvia and his wife would never get along, gave Silvia a pass enabling her and her young baby to travel back to New Jersey. There Silvia remained for the rest of her long life, working in different places for different people, including, over the course of many years, the Tulane family of Princeton, who settled there in 1792. She was working for them when Paul Tulane, for whom the University in Louisiana is named, was born in 1801.

Few Slaves in the Sourland area lived in quarters specially built for them; a cabin on Washington Well Farm, which still stands, is said to be an exception. In the case of one house on Hollow Road, the soil excavated in the cellar was heaped up along the walls about two feet high, against which the slaves slept when not bunking in the barn. Silvia, on the other hand, had positive memories: good beds to sleep in, with plenty of straw in the mattresses and plenty of woolen blankets. She and her fellow slaves were happily restricted to the kitchen, where the huge fireplace warmed the whole room. The rest of the house where the owners lived was often not so well heated, and, while the whites had more and better things to eat, sometimes it was not much. Their pies, Silvia remembered, were said to have moved her to a cottage in Larisons Corner. Her death during the blizzard of 1888 was reported in the Hunterdon County Democrat. Yet Silvia died not last long thereafter: her will was probated in the Hunterdon County Court in the following year.

Silvia was lucky. Slaves who turned on their masters or who became unruly were punished severely. She recalled vividly how the Flemington authorities treated blacks who became drunk or started fighting:

See them lick a dozen of them at a time. Tie them right
Up to a post and give them hell, right on the bare back:
Fetch the blood every time. And they’d holler. Good
God! Theyd howl til you could hear them a mile; and
Then when they had cut the backs all in slits, heyd put
Salt in the gashes, and then theyd howl

Silvia was present when a fourteen year old slave, James Guise (Little Jim), was publicly hanged in Flemington in 1828 for having murdered his mistress. Hanging was a more humane method of execution than some used in earlier years. In 1852 a slave was burned alive at Millstone for murdering his owner, Jacob Van Neste: slaves in the area were brought to witness the execution, forming an inner right around the pyre, while whites stood around in an outer circle as the sheriff rode round on his horse, whit sword drawn, between the fire and the spectators. Even well-behaved slaves were seldom allowed to forget their status as chatte! Tradition says iron rights once were fixed in the wooden pews on the far right of the upper balcony of the Neshanic Church to which slaves were shackled during religious services.