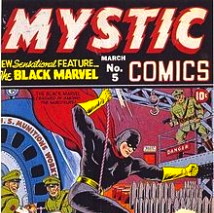 Black Panther is a cartoon series by Marvel Animation in partnership with BET, which was blocked from being aired in the US. The creators manipulated the establishment into producing it, but only after it was financed and previewed did the establishment realize what had happened and then yanked it from airing. It is a most political savy cartoon and DVD sales have been atop the charts of comic movies since its release, making it a favorite of many. If you understand the West and its relationship to Afrika this will be one of your favs too. Alfre Woodard, Kerry Washington, Jill Scott and Djimon Hounsou starring as Black Panther, round out an all star cast for this wonderful and valuable work of art. Watch, learn, enjoy and share. 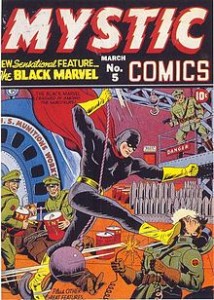 The Black Marvel (Daniel Lyons) is a fictional comic book superhero in the Marvel Comics universe. Created by artist Al Gabriele with an unknown writer, he first appeared in Mystic Comics #5 (March 1941), published by Marvel’s 1940’s forerunner Timely Comics during the period fans and historians call the Golden Age of comic books.

The Black Marvel appeared in the multi-character omnibus title Mystic Comics #5-9 (March 1941 – May 1942). His first-appearance origin story was reprinted in Marvel Super-Heroes #15 (July 1968).

The character also starred in a story in All Winners Comics #1 (Summer 1941), which was written by Lee and reprinted in The Golden Age of Marvel Comics, Vol. 2. The cover was also reprinted in Giant-Size Invaders vol. 2, #2 (Dec. 2005).

He was chosen by a “Black Feet” (sic) native American chief (not specifically tied to the real-life Blackfoot tribe) to be a champion of justice, after besting 100 challengers by outrunning a deer, outswimming a salmon upstream, hitting the bullseye while blindfolded and then catching arrows that were fired at him, and then wrestling a bear, finally winning by breaking its neck with his bare hands. He was given a long bow into which he carved a notch whenever he performed a good deed. When he had attained 100 notches he would be judged worthy of having taken the mantle of the Black Marvel.

In later years, Lyons made a Faustian bargain with the demonic being Mephisto that allowed Lyons to obtain four superpowered costumes abandoned by the superhero Spider-Man, and to use them to launch the superhero team the Slingers.  The heroes eventually helped release Lyons from his demonic contract, allowing him to die in peace.

In other media – Television 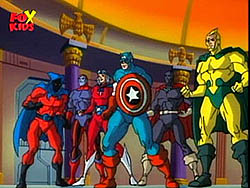 Black Marvel (second from right) along with the other five “Forgotten Warriors.”

The Black Marvel appeared on Spider-Man: The Animated Series in the five-part episode Six Forgotten Warriors voiced by Paul Winfield. Here, the Black Marvel is Omar Mosely, and a friend and former teacher of Daily Bugle editor Joseph “Robbie” Robertson. The Mayor of Superhero City on The Super Hero Squad Show wears a costume based on Black Marvel.