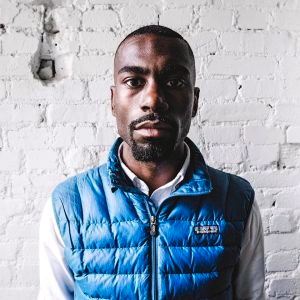 Black Lives Matter marches took place across the UK on Friday and Saturday to protest the latest police killings of black men in the US. 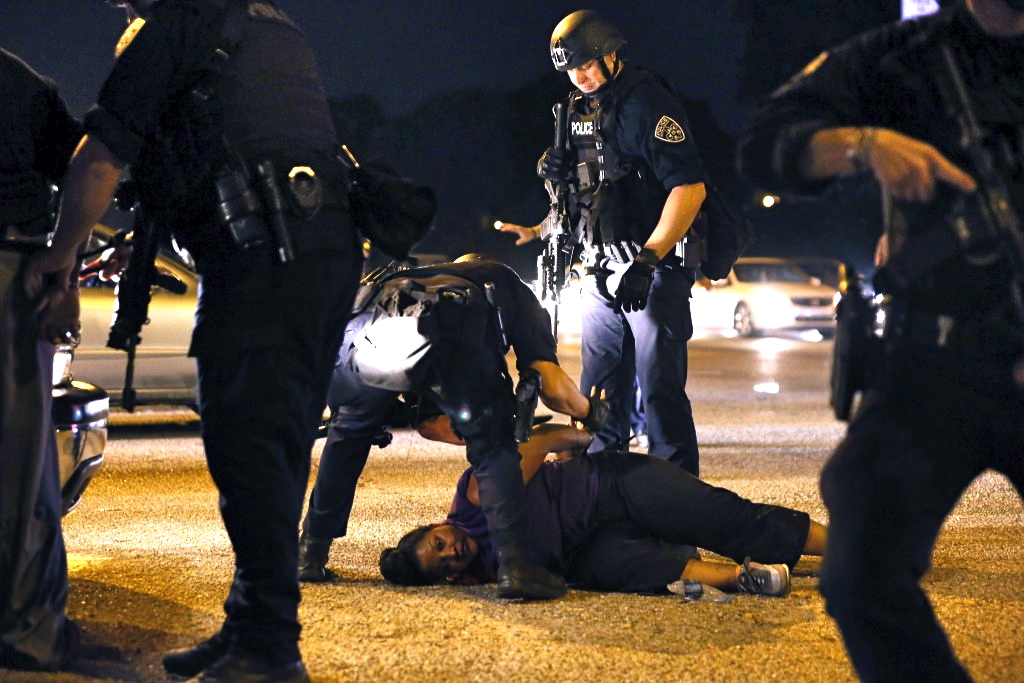 A woman protesting the shooting death of Alton Sterling is detained by law enforcement near the headquarters of the Baton Rouge Police Department in Baton Rouge, Louisiana, U.S. July 9, 2016. Photo By Jonathan Bachman/Reuters

As demonstrations against police brutality continued across the country, a leading voice for the Black Lives Matter movement along with three local journalist and dozens of others were arrested by police Saturday in Baton Rouge.

Activist DeRay Mckesson, who ran an unsuccessful bid to become Baltimore’s mayor last year, was live streaming a protest against the recent police shooting of Alton Sterling when he was taken into custody along a Louisiana highway. He was released on Sunday.

On Saturday, Mckesson used the social media app Periscope to capture the event as he was walking with other protesters.

On the feed, some demonstrators are heard chanting “No Justice, No Peace, No Racist Police” as a parade of law enforcement vehicles trailed behind with several officers on foot.

“You with them loud shoes, I see you in the road,” said one person, who seemed to be an officer. “If I get close to you, you’re going to jail.”

Activist DeRay Mckesson is seen in this photograph posted to his Facebook page on June 23. Photo via Facebook.

DeRay, who appeared to be walking on the shoulder of the roadway, replied multiple times that there was no sidewalk. Moments later he was in custody.

“I’m under arrest y’all,” he said, before another individual took his phone and continued streaming the video.

Brittany Packnett, an activist who was walking with DeRay during the demonstration, posted about his arrest on Twitter in the early morning hours Sunday, urging her followers call the jail where DeRay and others were held.

Packnett told the Washington Post she believed DeRay was “clearly targeted” by police. A total of 130 people were taken into custody during the demonstrations, the Associated Press reported.

A woman who answered the phone at Baton Rouge Police Department headquarters Sunday morning told the NewsHour that no new information on the arrests was available.

A video posted by a local reporter on Twitter showed a brief interview with Louisiana State Police Maj. Doug Cain, who said police had warned the protesters to stay off the road.

“As soon as they start obstructing the roadway, we warned them and then we move in and take action,” he said.

An affidavit of probable cause filed by police and acquired by the AP said Mckesson deliberately went into the road, while Louisiana law enforcement officials placed blame for the escalation on those from out of town.

“I remain disappointed in the Baton Rouge police, who continue to provoke protesters for peacefully protesting,” Mckesson said, after his release. “There’s a lot of work to be done, with this police department specifically.”

WWNO 88.9, a local NPR affiliate, confirmed on Facebook Sunday morning that one its journalists, Ryan Kailath, was in police custody in Baton Rouge on one count of obstruction of a highway. 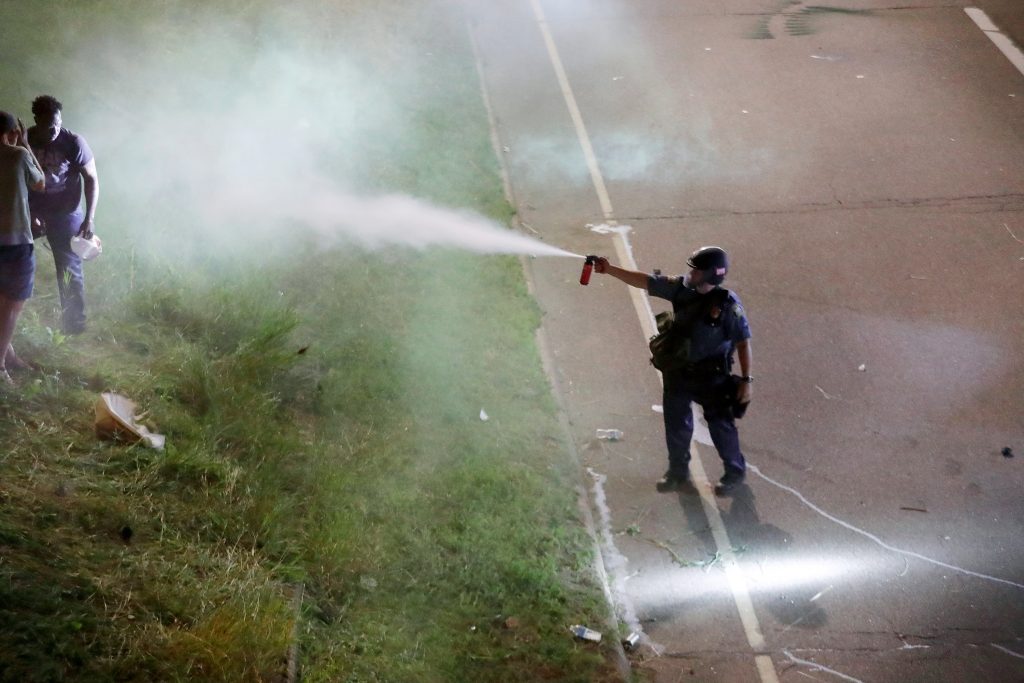 Multiple people also were arrested in Minnesota’s state capital as protests there continued for a fourth night with demonstrations spilling onto a major highway.

Protesters reportedly threw fireworks at police before the officers, clad in riot gear, used smoke and pepper spray to clear them from the roadway.

Combined, 21 officers and six state police troopers were injured during the standoff against an estimated 200 people, who blocked Interstate 94, the AP reported.

The protests took place outside St. Paul over the death of Philando Castile, who was shot by a police officer Wednesday during a traffic stop with his girlfriend and her four-year-old child inside the vehicle. 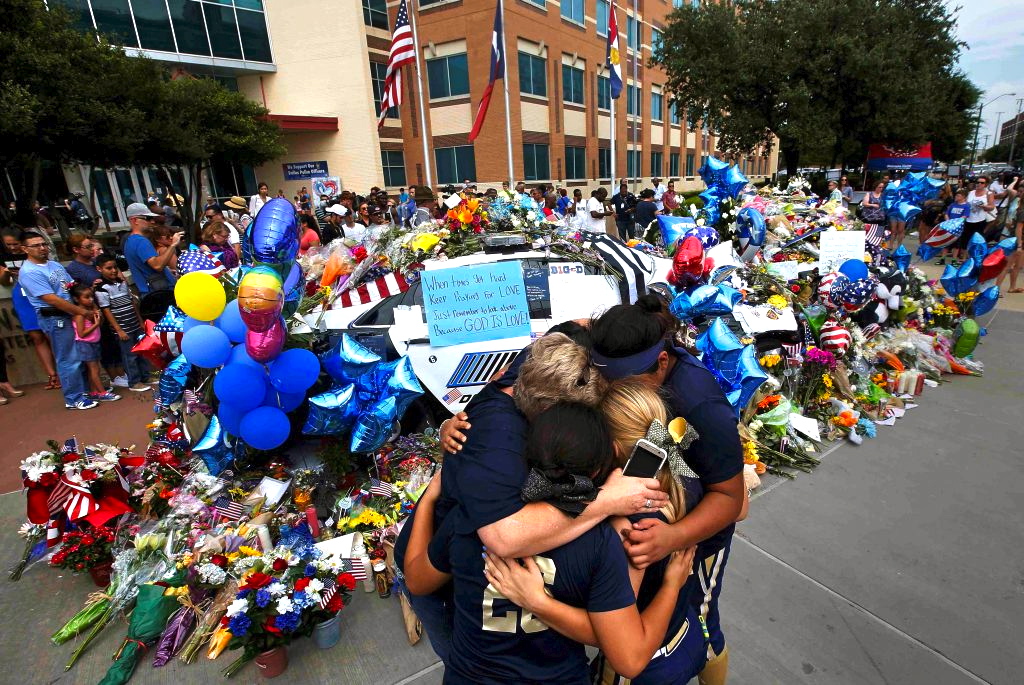 A softball team hugs after paying their respects at a makeshift memorial at Dallas Police Headquarters following the multiple police shootings in Dallas, Texas, U.S., July 9, 2016. Photo By Carlo Allegri/Reuters

Demonstrations continued in cities across the United States this weekend over police discrimination against black people and following Thursday’s killing of five Dallas police officers by a former Army reservist.

A makeshift memorial for the officers outside the Dallas Police Department headquarters continued to grow on Sunday.