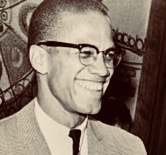 “It’s a problem of human rights. It’s a problem of recognizing and respecting the 22 million Afro-Americans as human beings.” A defining voice of the Civil Rights Movement, Malcolm X was assassinated on this day in 1965.

Death threats and intimidation from Nation of Islam 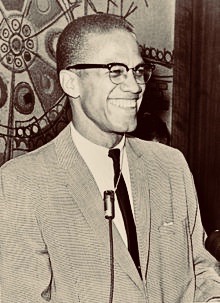 Malcolm X guards his family in an iconic Ebony photo.

Throughout 1964, as his conflict with the Nation of Islam intensified, Malcolm X was repeatedly threatened.

In February, a leader of Temple Number Seven ordered the bombing of Malcolm X’s car. In March, Muhammad told Boston minister Louis X (later known as Louis Farrakhan) that “hypocrites like Malcolm should have their heads cut off”; the April 10 edition of Muhammad Speaks featured a cartoon depicting Malcolm X’s bouncing, severed head.

On June 8, FBI surveillance recorded a telephone call in which Betty Shabazz was told that her husband was “as good as dead.” Four days later, an FBI informant received a tip that “Malcolm X is going to be bumped off.”  (That same month the Nation sued to reclaim Malcolm X’s residence in East Elmhurst, Queens, New York. His family was ordered to vacate but on February 14, 1965‍—‌the night before a hearing on postponing the eviction‍—‌the house was destroyed by fire.)

On July 9 Muhammad aide John Ali (suspected of being an undercover FBI agent) referred to Malcolm X by saying, “Anyone who opposes the Honorable Elijah Muhammad puts their life in jeopardy.” In the December 4 issue of Muhammad Speaks, Louis X wrote that “such a man as Malcolm is worthy of death.”

The September 1964 issue of Ebony dramatized Malcolm X’s defiance of these threats by publishing a photograph of him holding an M1 carbine while peering out a window.

The day of the Assassination 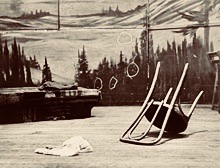 The Audubon Ballroom stage after the murder. Circles on backdrop mark bullet holes.

On February 19, 1965, Malcolm X told interviewer Gordon Parks that the Nation of Islam was actively trying to kill him. On February 21, 1965, he was preparing to address the OAAU in Manhattan’s Audubon Ballroom when someone in the 400-person audience yelled, “Nigger! Get your hand outta my pocket!” As Malcolm X and his bodyguards tried to quell the disturbance, a man rushed forward and shot him once in the chest with a sawed-off shotgun and two other men charged the stage firing semi-automatic handguns. Malcolm X was pronounced dead at 3:30 pm, shortly after arriving at Columbia Presbyterian Hospital. The autopsy identified 21 gunshot wounds to the chest, left shoulder, arms and legs, including ten buckshot wounds from the initial shotgun blast.

One gunman, Nation of Islam member Talmadge Hayer (also known as Thomas Hagan), was beaten by the crowd before police arrived. Witnesses identified the other gunmen as Nation members Norman 3X Butler and Thomas 15X Johnson. All three were convicted of murder in March 1966 and sentenced to life in prison. At trial Hayer confessed, but refused to identify the other assailants except to assert that they were not Butler and Johnson. In 1977 and 1978, he signed affidavits reasserting Butler’s and Johnson’s innocence, naming four other Nation members as participants in the murder or its planning. These affidavits did not result in the case being reopened.

Butler, today known as Muhammad Abdul Aziz, was paroled in 1985 and became the head of the Nation’s Harlem mosque in 1998; he maintains his innocence. In prison Johnson, who changed his name to Khalil Islam, rejected the Nation’s teachings and converted to Sunni Islam. Released in 1987, he maintained his innocence until his death in August 2009. Hayer, today known as Mujahid Halim, was paroled in 2010.[190]

A CNN Special Report, Witnessed: The Assassination of Malcolm X, was broadcast on February 17, 2015. It featured interviews with several people who worked with him, including A. Peter Bailey and Earl Grant, as well as the daughter of Malcolm X, Ilyasah Shabazz. To learn more about Malcolm X go to the link below: