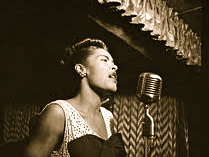 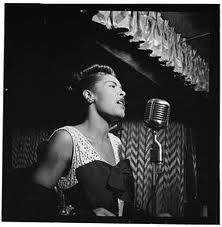 Critic John Bush wrote that Holiday “changed the art of American pop vocals forever.”   She co-wrote only a few songs, but several of them have become jazz standards, notably “God Bless the Child“, “Don’t Explain“, “Fine and Mellow“, and “Lady Sings the Blues“. She also became famous for singing “Easy Living“, “Good Morning Heartache“, and “Strange Fruit“, a protest song which became one of her standards and was made famous with her 1939 recording.

Death: In early 1959 she found out that she had cirrhosis of the liver. The doctor told her to stop drinking, which she did for a short time, but soon returned to heavy drinking.   By May she had lost twenty pounds. Friends Leonard Feather, Joe Glaser, and Allan Morrison tried to get her to check into a hospital, but she put them off.

On May 31, 1959, Holiday was taken to Metropolitan Hospital in New York suffering from liver and heart disease. She was arrested for drug possession as she lay dying, and her hospital room was raided by authorities.   Police officers were stationed at the door to her room. Holiday remained under police guard at the hospital until she died from pulmonary edema and heart failure caused by cirrhosis of the liver on July 17, 1959. In the final years of her life, she had been progressively swindled out of her earnings, and she died with $0.70 in the bank and $750 (a tabloid fee) on her person. Her funeral mass was held at Church of St. Paul the Apostle in New York City.

Gilbert Millstein of The New York Times, who had been the narrator at Billie Holiday’s 1956 Carnegie Hall concerts and had partly written the sleeve notes for the album The Essential Billie Holiday (see above), described her death in these same 1961-dated sleeve notes:

“Billie Holiday died in the Metropolitan Hospital, New York, on Friday, July 17, 1959, in the bed in which she had been arrested for illegal possession of narcotics a little more than a month before, as she lay mortally ill; in the room from which a police guard had been removed – by court order – only a few hours before her death, which, like her life, was disorderly and pitiful. She had been strikingly beautiful, but she was wasted physically to a small, grotesque caricature of herself. The worms of every kind of excess – drugs were only one – had eaten her … The likelihood exists that among the last thoughts of this cynical, sentimental, profane, generous and greatly talented woman of 44 was the belief that she was to be arraigned the following morning. She would have been, eventually, although possibly not that quickly. In any case, she removed herself finally from the jurisdiction of any court here below.”