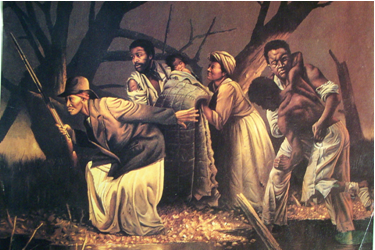 He was a good baker so he knew he could get work some where else, if they would have him, but he could not stay with Cornelius Chopper anymore. He Mr. Chopper taught him the baking trade, but he made him wear an iron collar. He didn’t want to wear that collar so he left with only the clothes on his back, an old red cloth jacket and a pair of homespun trousers. He thought his low Dutch been useful at Raritan Landing where so many people still spoke Dutch, but his english was good, too. He was young and strong and would settle wherever possible, as long as he could be free. Thats what mattered most and not to have that collar around his neck..

Picture above: HARRIET TUDMAN WITH A GROUP OF RUNAWAY SLAVES