You are here: Home / Education / Politics / US Politics / Biden eyes 270 as he gains on Trump in Pennsylvania Stephen Collinson and Maeve Reston, CNN

Biden eyes 270 as he gains on Trump in Pennsylvania Stephen Collinson and Maeve Reston, CNN 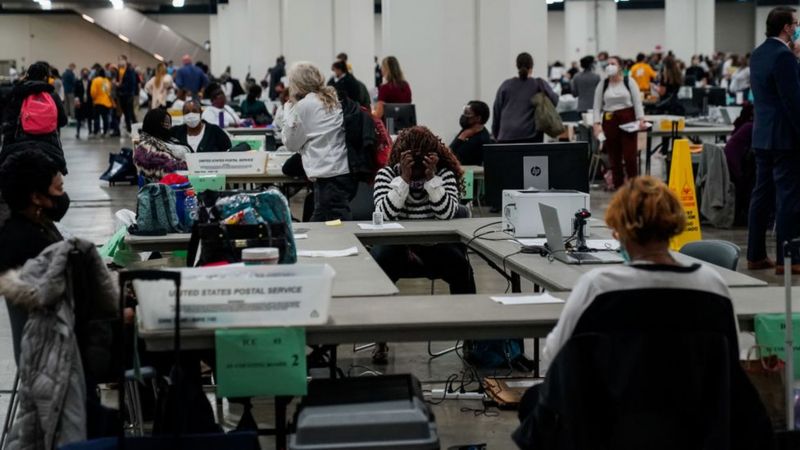 Democrat Joe Biden is closing on President Donald Trump in tense vote counts in Pennsylvania and Georgia, two states that the current occupant of the White House cannot afford to lose if he is to keep alive his hopes of a second term.Biden relentlessly piled up votes through the night and all day as counting goes on in the two states, racking up huge margins among mail-in ballots favored by Democratic voters. As the drama unfolded across the country, the President’s allies launched legal challenges and floated conspiracy theories as Trump tweeted “Stop the Count!” Tight races are also going into overtime in two other states that could influence the destiny of the race, Nevada and Arizona. Biden so far has 253 electoral votes and the President has 213, according to CNN projections.Pennsylvania, the state that could take Biden over the 270-vote threshold needed to win the presidency, could complete most of its outstanding counts on Thursday or Friday, officials there said. The former vice president is only behind Trump by a little more than 97,000 votes in the Keystone State after having trailed at one point by more than half a million ballots in the hours after polls closed. Tens of thousands of votes — most of them from strongly Democratic areas, including around Philadelphia — remain to be counted.In Georgia, another state that Trump cannot afford to lose with its 16 electoral votes, Biden’s mail-in ballot advantage has pulled him to less than 13,000 votes of the President, with 47,000 votes still out, as results came in from Fulton County around Atlanta with 98% of the state vote count reported. To read more go to the link below: