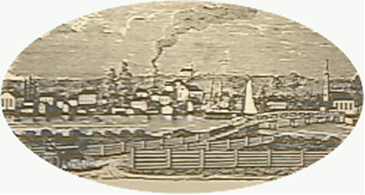 Source: Belleville: 150th-Anniversary Historical Highlights 1839-1989 by Robert B. Burnet and the Belleville 150th-Anniversary Committee Belleville, New Jersey. 1991 Belleville, a place carrying the French name for “beautiful town,” stands on the west bank of the Passaic River in Essex County, New Jersey. Today it is difficult to see the river from the town because of modern changes-especially the construction of Route 21-that have separated the two. Modern Belleville is no longer dependent upon the Passaic River as it once was, indicating that an ancient connection has been broken. The story of Belleville is a story of change. The relationship between the town and the river hints of the great changes that Belleville has experienced during its 300-year history. At one time the river tied the town to the world beyond; today roads have replaced the river as the most important means of transportation. At one time Belleville was a great center of industry and manufacturing; today it is largely a place of homes and stores. This web page is an introduction to a few events and people in Belleville history.

A TOWN GETS ITS NAME

On Saturday, June 24, 1797, inhabitants of the Second River settlement met at John Ryerson’s house for the purpose of giving a new name to their home. The minutes of the meeting tell what happened there:

It appears that the name of Washington-the hero of the Revolutionary War and soon to become the first president of the United States-was not completely satisfactory to some of the residents. They complained that the name Washington applied to a much wider area than simply their settlement by the bridge across the Passaic River. So, another meeting was held on Monday, June 26, 1797. The minutes of this meeting said:

“We, the subscribers, inhabitants and freeholders living near the Bridge at the village commonly called Second River, but now called Washington, comprehending the district of Newton, Povershon, etc. (the names of tiny neighboring settlements), apprehending that many inconveniences would arise from the want of a name to distinguish the said village when particularly alluded to, do therefore. Resolve, to distinguish the said village (when alluded to separately, from the district comprehending Washington) by the name of Belleville.”

The minutes were signed by the clerk of the meeting, Josiah Hornblower.

Picture: Woodcut of Belleville in the 1840s.