You are here: Home / Colleges and Universities / Education / Bella Bella 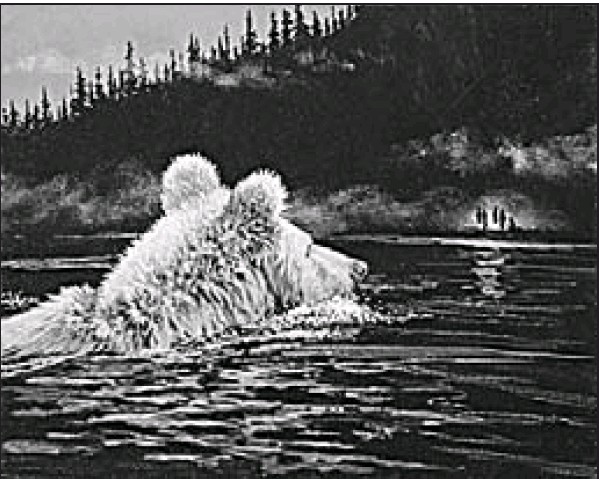 STORY SO FAR: As Aaron is wondering whether or not Chinese immigrants are being smuggled by the captain of the SeaWolf, he and his friends hear something ominous splashing through the shallows.

THE night was still and dark. The waxing moon was trapped in a tree, lost in foliage. We walked in a crouch behind Willie through the dense, stunted spruce. It suddenly occurred to me: What if it were smugglers, and what if they were hunting us down? We had no weapons (unless you counted bowie knives)â€”no way to defend ourselves if they had guns. We should be hiding, not heading unarmed toward whatever was coming.

Willie ducked behind a boulder at the water edge, and we squatted down beside him as he trained the beam of his flashlight on the star-freckled water. Something big and dark was swimming toward us. As it drew closer, we could see a large hump behind a massive head.

â€œBrown bear! Willie cried. Cassidy didnt hesitate. He picked up a rock and fired it at the approaching animal.

Don Dad cried. But then Willie picked up a large stone and lobbed it right at the bear head. Soon we were all all except Dad bombarding the poor bear with rocks. I say poor bear, but I read about them how the huge, coastal brown bears are fast and unpredictable. I picked up another stone and skimmed it across the bear back.

The bear was maybe twenty-five yards out when it turned around and swam the other way. Cassidy let out a hair-raising howl and yelled, â€œAdios, old bear!â€
â€œBrown bears can climb trees, Roger said.  If it had come ashore, there be no place on this island to hide. And that was a rogue bear; brown bears rarely leave the mainland. It should be on a bank, batting salmon out of a river somewhere. That one was more dangerous than most.

Dad rubbed his jaw. Then he patted Cassidy back and said, Good job, Cassidy. It was like a kick in the stomach hearing my dad praise him like that. I couldnâ€™t remember the last time he praised me.

And I could not help but think, What if it had been smugglers? Throwing rocks wouldnâ€™t have done much good against them.

got pepper spray, Lisa said, as if reading my mind. That bear wasn gonna get in my face!

I wasn fully awake the next morning till we were in the middle of Tide Rip Pass, heading southwest. On the ebb tide, tide rips and standing waves announced the juncture of Tide Rip Pass and Queen Sound. It was like shooting the rapids in Desolation Canyon, only we were in narrow kayaks instead of wide rafts. Roger had coached us never to allow our kayak to be struck broadside by a wave, but I had to rely on Dad in the cockpit behind me, working the foot pedals to operate the rudder.

Whoa! Willie howled. You’ll flip in this chowder if you dont watch out! The sea roiled white around us as we struggled to point the prow at a slight angle into each crashing wave. Water seeped down my waist where my spray skirt wasnt drawn tight enough. It was puddling on the seat beneath me and it was cold.

My heart raced, and I paddled like a windmill. Panic was kept at bay only by the sheer total concentration required to get us through.

At last, about halfway to Goose Island, the McMullin Islets provided shelter. We paused and rested, as if wead just climbed a peak. To the east, in the far distance, was the great continent of North America; to the west was the vast Pacific Ocean. And the smugglers”if that’s what they were nowhere in sight.

The beach on the northwestern coast of Goose Island was another stretch of paradise, the sand pure white and composed of clam shells pulverized by the ocean surf. When we raced across it, the sand squeaked beneath our bare feet, like the squeal of basketball shoes on a gymnasium floor. Again I held my own against Lisa. She laughed, breathless, face flushed with blood, and flung her arms over my shoulders when we came to a stop. I turned around, put my hands on her bony hips, and kissed her on the lips.

I dont know who was more surprised. It wasnt a deep kiss, but it was our first. She didnt pull away, but her dark eyes drilled into mine as if she was searching for water beneath the sand.

I looked over her shoulders, down the beach. Cassidy was already digging for clams in the wet sand.

And that evening we ate butter clams, horse clams, bittersweets, bent-nosed clams, and steamers. Cooked by Willie, that meal was one of the best I’ve ever had. We stayed up so late telling scary stories that the flood tide drowned the fire at our feet before we hit the sack.

We made camp well in the trees, because the wind off the open ocean can blow an empty tent clear out to sea plus we didnt want to be spotted by the Sea Wolf, if it came looking for us. But I wasnt ready to sleep. I stepped in the dark toward Roger and Lisa tent. I hoped shed come out so we could talk and maybe even snuggle. But I heard laughter coming from Cassidy tent. It sounded like Lisa.

I hesitated, burning with jealousy, but crept over and said, Knock knock, and ducked in. They looked up, startled. Seated Indian style facing each other, they were playing cards.

Hey, I said, trying to sound cool. Can I join ya? If you wanna play strip poker. Cassidy remained deadpan, but Lisa let out a shriek.

Suddenly we heard the throb and hum of a boat cruising the shore. We threw back the flap. A powerful spotlight was sweeping the beach.