As Sandy Relief Lags, Residents from Red Hook to Hoboken Band Together for Community Response 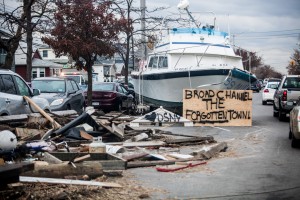 In our first broadcast since the Democracy Now! studio regained power, we’re joined by three staffers who have been on the ground taking part in and reporting on the tri-state’s response to Superstorm Sandy: Democracy Now! senior producer Mike Burke, who visited the devastated peninsula of Far Rockaway; Democracy Now! producer Steve Martinez, who lives in northwestern New Jersey and has a family home on the Jersey Shore; and Democracy Now! social media coordinator Jessica Lee, who lives in Red Hook, one of the hardest-hit areas of Brooklyn. [includes rush transcript] 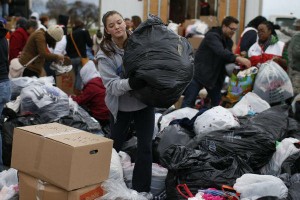 AMY GOODMAN: In a moment, we’re going to go to the elections. We’ll be going to Ohio to talk about voter suppression with The Nation magazine’s Ari Berman. But before we do that, a moment ago we played a clip of the Staten Island borough president, James Molinaro, talking about the lack of American Red Cross response, and the Red Cross apologizing, saying, you know, this was such a massive storm. They said afterwards, this is such a massive storm, that it was difficult to actually get there.

Well, Democracy Now! has been on the ground from the beginning. And we’re going to talk about who was there. We’re joined by Democracy Now! senior producer Mike Burke; Jessica Lee, our social media director, who lives in Red Hook; and Steve Martinez, our video producer who lives in New Jersey, the hardest-hit areas of the storm.

Jessica, let’s start with you, because what happened in Red Hook—and, Mike, what you’re talking about, in speaking with the organizer for Occupy Wall Street in Rockaways, was quite stunning, the difference in the response. Jessica?

JESSICA LEE: Right. So, I’ve had sort of this triple hat the last week. I’ve been a resident in Red Hook, also stepping in as an organizer, and also a journalist. So it’s been an interesting experience.

But what happened was, I think this flood in Red Hook has been a mirror for our community to see ourselves. And the organizations that were already in place, the networks, the friendships that were already there, just sprung into action, right the morning after the flood. I think about two-thirds or three-quarters of our neighborhood was flooded by about three or four feet of water, so we’re talking every building, basement and first floor, is wet and needs to be cleaned. Almost all the businesses in Red Hook have been affected by this. And people knew that the morning after, and nobody waited for the city. No one waited to hear anything. They started organizing.