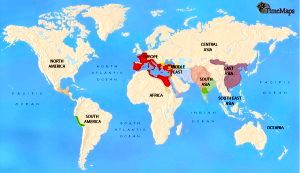 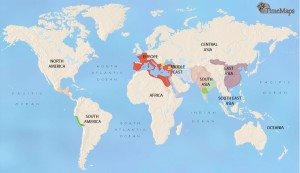 Timeline of Ancient history is the historical events in time of the documented ancient past from the beginning of recorded history until the Early Middle Ages.

The Bronze Age refers to a period in human cultural development when the most advanced metalworking (at least in systematic and widespread use) included techniques for smelting copper and tin from naturally-occurring outcroppings of copper ores, and then smelting those ores to cast bronze. These naturally-occurring ores typically included arsenic as a common impurity. Copper/tin ores are rare, as reflected in the fact that there were no tin bronzes in western Asia before 3000 BC. In some parts of the world, a Copper Age follows the Neolithic and precedes the Bronze Age.

The Iron Age was the stage in the development of any people in which tools and weapons whose main ingredient was iron were prominent. The adoption of this material coincided with other changes in some past societies often including differing agricultural practices, religious beliefs and artistic styles, although this was not always the case.

Classical antiquity is a broad term for a long period of cultural history centered on the Mediterranean Sea, comprising the interlocking civilizations of Ancient Greece and Ancient Rome. It refers to the timeframe of ancient Greece and ancient Rome. Ancient history includes the recorded Greek history beginning in about 776 BC (First Olympiad). This coincides roughly with the traditional date of the founding of Rome in 753 BC and the beginning of the history of Rome.

End of Ancient History in Europe

The date used as the end of the ancient era is entirely arbitrary. The transition period from Classical Antiquity to the Early Middle Ages is known as Late Antiquity. Late Antiquity is a periodization used by historians to describe the transitional centuries from Classical Antiquity to the Middle Ages, in both mainland Europe and the Mediterranean world: generally from the end of the Roman Empire’s Crisis of the Third Century (c. AD 284) to the Islamic conquests and the re-organization of the Byzantine Empire under Heraclius. The Early Middle Ages are a period in the history of Europe following the fall of the Western Roman Empire spanning roughly five centuries from AD 500 to 1000. Not all historians agree on the ending dates of ancient history, which frequently falls somewhere in the 5th, 6th, or 7th century. Western scholars usually date the end of ancient history with the fall of Rome in AD 476, the death of the emperor Justinian I in AD 565, or the coming of Islam in AD 632 as the end of ancient European history.