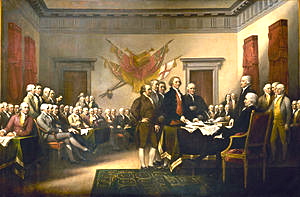 In 1763, the capitol city of America is London, George Washington is lobbying for a post in the British army, and no one thinks of Boston harbor when they hear talk of tea parties. In a dozen years, the colonies are on the brink of rebellion. What happens to bring this country so quickly near war with England?

A total break from Great Britain remains hard for Americans to imagine, even after shots are fired at Lexington and Concord. Words push matters “Over the Edge” in 1776. Common Sense argues that it is the natural right of men to govern themselves. The Declaration of Independence declares this same idea a “self-evident” truth. For Americans, there is no looking back. There will be war with England. 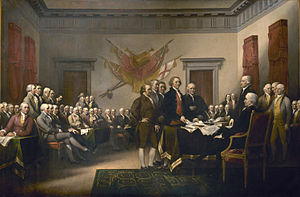 The American Revolution was the political upheaval during the last half of the 18th century in which thirteen colonies in North America joined together to break free from the British Empire, combining to become the United States of America. They first rejected the authority of the Parliament of Great Britain to govern them from overseas without representation, and then expelled all royal officials. By 1774, each colony had established a Provincial Congress, or an equivalent governmental institution, to govern itself, but still within the empire. The British responded by sending combat troops to re-impose direct rule. Through representatives sent in 1775 to the Second Continental Congress, the states joined together at first to defend their respective self-governance and manage the armed conflict against the British known as the American Revolutionary War (also: American War of Independence, 1775–83). Ultimately, the states collectively determined that the British monarchy, by acts of tyranny, could no longer legitimately claim their allegiance. They then severed ties with the British Empire in July 1776, when the Congress issued the United States Declaration of Independence, rejecting the monarchy on behalf of the new sovereign nation separate and external to the British Empire. The war ended with effective American victory in October 1781, followed by formal British abandonment of any claims to the United States with the Treaty of Paris in 1783.

The American Revolution was the result of a series of social, political, and intellectual transformations in early American society and government, collectively referred to as the American Enlightenment. Americans rejected the oligarchies and aristocracies common in Europe at the time, championing instead the development of republicanism based on the Enlightenment understanding of liberalism. Among the significant results of the revolution was the creation of a democratically-elected representative government responsible to the will of the people. However, sharp political debates erupted over the appropriate level of democracy desirable in the new government, with a number of Founders fearing mob rule.

Many fundamental issues of national governance were settled with the ratification of the United States Constitution in 1788, which replaced the relatively weaker first attempt at a national government adopted in 1781, the Articles of Confederation and Perpetual Union. In contrast to the loose confederation, the Constitution established a strong federated government. The United States Bill of Rights(1791), comprising the first 10 constitutional amendments, quickly followed. It guaranteed many “natural rights” that were influential in justifying the revolution, and attempted to balance a strong national government with relatively broad personal liberties. The American shift to liberal republicanism, and the gradually increasing democracy, caused an upheaval of traditional social hierarchy and gave birth to the ethic that has formed a core of political values in the United States.