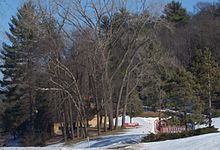 APT sits on 110 acres (0.45 km2) of woods and meadow just off the Wisconsin River across Wisconsin Highway 23 from Frank Lloyd Wright‘s studio Taliesin. Founded in 1979, APT has grown rapidly in recent years, with more than 100,000 patrons attending performances each year. It currently claims to have the second largest audience in the United States for outdoor classical theater.

APT typically produces 116 performances of five plays running in repertory from June to October. In 2009, APT opened the new, indoor Touchstone Theatre. With 200 seats, the Touchstone provides an intimate, complementary space to the outdoor amphitheater, and allows for new genres to grace an APT stage. APT’s repertoire consists primarily of plays by Shakespeare and other noted (usually Western) playwrights, such as George Bernard Shaw, Anton Chekhov, and Molière. Three of the plays “up the hill” are typically Shakespeares, with some 20th-century productions performed in the Touchstone.

A significant part of APT’s mission is its education program. APT works with schools and educators to teach students both about Shakespeare and other classic dramatic works, and about the theater in general. Each season, APT offers student matinees during school hours in the fall. The actors of APT also conduct in-school workshops.

APT offers picnic dinners and a picnic area for those who bring their own food to enjoy before the show. Thursday night shows are billed as “Skippeth-Out-Of-Work-Early Thursday Nights”.

APT was co-founded by Randall Duk Kim, Anne Occhiogrosso and Charles Bright. Kim was the artistic director and mainstay lead actor for 15 years before reviving a movie career after a dispute with the board of directors.