Great Museums : In Our Time: The Museum of Modern Art

What do the superstars of modern art have in common with the Vincent Black Shadow motorcyle? They share the stage at New York City’s Museum of Modern Art, also known as MoMA. Produced for Public Television by Great Museums TV. For more information, visit http://greatmuseums.org. 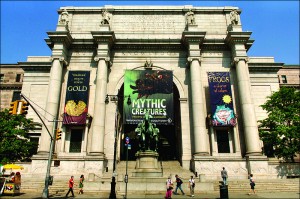 The American Museum of Natural History (abbreviated as AMNH), located on the Upper West Side of Manhattan in New York City is one of the largest and most celebrated museums in the world. Located in park-like grounds across the street from Central Park, the museum complex contains 27 interconnected buildings housing 45 permanent exhibition halls, in addition to a planetarium and a library. The museum collections contain over 32 million specimens of plants, humans, animals, fossils, minerals, rocks, meteorites, and human cultural artifacts, of which only a small fraction can be displayed at any given time, and occupies 1,600,000 square feet (150,000 m2). The Museum has a full-time scientific staff of 225, sponsors over 120 special field expeditions each year, and averages about five million visits annually.

The Museum was founded in 1869.’  Prior to construction of the present complex, the Museum was housed in the Arsenal building in Central Park. Theodore Roosevelt, Sr., the father of the 26th U.S. President, was one of the founders along with John David Wolfe, William T. Blodgett, Robert L. Stuart, Andrew H. Green, Robert Colgate, Morris K. Jesup, Benjamin H. Field, D. Jackson Steward, Richard M. Blatchford, J. Pierpont Morgan, Adrian Iselin, Moses H. Grinnell, Benjamin B. Sherman, A. G. Phelps Dodge, William A. Haines, Charles A. Dana, Joseph H. Choate, Henry G. Stebbins, Henry Parish, and Howard Potter. The founding of the Museum realized the dream of naturalist Dr. Albert S. Bickmore. Bickmore, a one-time student of Harvard zoologist Louis Agassiz, lobbied tirelessly for years for the establishment of a natural history museum in New York. His proposal, backed by his powerful sponsors, won the support of the Governor of New York, John Thompson Hoffman, who signed a bill officially creating the American Museum of Natural History on April 6, 1869.

In 1874, the cornerstone was laid for the Museum’s first building, which is now hidden from view by the many buildings in the complex that today occupy most of Manhattan Square. The original Victorian Gothic building, which was opened in 1877, was designed by J. Wrey Mould, both already closely identified with the architecture of Central Park.  It was soon eclipsed by the south range of the Museum, designed by J. Cleaveland Cady, an exercise in rusticated brownstone neo-Romanesque, influenced by H. H. Richardson.  It extends 700 feet (210 m) along West 77th Street, with corner towers 150 feet (46 m) tall. Its pink brownstone and granite, similar to that found at Grindstone Island in the St. Lawrence River, came from quarries at Picton Island, New York.  The entrance on Central Park West, the New York State Memorial to Theodore Roosevelt, completed by John Russell Pope in 1936, is an overscaled Beaux-Arts monument. It leads to a vast Roman basilica, where visitors are greeted with a cast of a skeleton of a rearing Barosaurus defending her young from an Allosaurus. The Museum is also accessible through its 77th street foyer, renamed the “Grand Gallery” and featuring a fully suspended Haida canoe. The hall leads into the oldest extant exhibit in the Museum, the hall of Northwest Coast Indians. 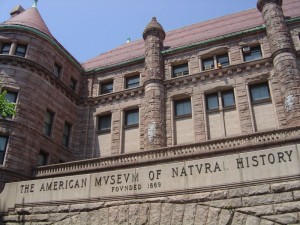 The old 77th Street Entrance of the Museum

Locations of exploring and field parties in 1913, American Museum of Natural History Map

Since 1930 little has been added to the exterior of the original building.

The architect Kevin Roche and his firm Roche-Dinkeloo has been responsible for the master planning of the museum since the 1990s. Various renovations both interior and exterior have been carried out including improvements to Dinosaur Hall and mural restoration in Roosevelt Memorial Hall. In 1992 the firm designed the new eight story AMNH Library. Additional renovations are currently under way.

The Museum’s south front, spanning 77th Street from Central Park West to Columbus Avenue was cleaned, repaired and re-emerged in 2009. Steven Reichl, a spokesman for the Museum, said that work would include restoring 650 black-cherry window frames and stone repairs. The Museum’s consultant on the latest renovation is Wiss, Janney, Elstner Associates, Inc., an architectural and engineering firm with headquarters in Northbrook, IL.

The museum’s first two presidents were John David Wolfe (1870–1872) and Robert L. Stuart (1872–1881), both among the museum’s founders. The museum was not put on a sound footing until the appointment of the third president, Morris K. Jesup (also one of the original founders), in 1881. Jesup was president for over 25 years, overseeing its expansion and much of its golden age of exploration and collection. The fourth president, Henry Fairfield Osborn, was appointed in 1906 on the death of Jesup. Osborn consolidated the museum’s expansion, developing it into one of the world’s foremost natural history museums. F. Trubee Davison was president from 1933 to 1951, with A. Perry Osborn as Acting President from 1941 to 1946. Alexander M. White was president from 1951 to 1968.Gardner D. Stout was president from 1968 to 1975. Robert G. Goelet from 1975 to 1988. George D. Langdon, Jr. from 1988 to 1993.Ellen V. Futter has been president of the museum since 1993. 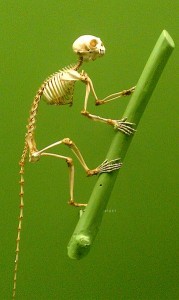 Primate skeleton from the Hall of Primates.

The Museum boasts habitat dioramas of African, Asian and North American mammals, a full-size model of a Blue Whale suspended in the Hall of Ocean Life, sponsored by the family of Paul Milstein (reopened in 2003), a 62 foot (19 m) Haida carved and painted war canoe from the Pacific Northwest, a massive 31 ton piece of the Cape York meteorite, and the Star of India, one of the largest star sapphires in the world. The circuit of an entire floor is devoted to vertebrateevolution. 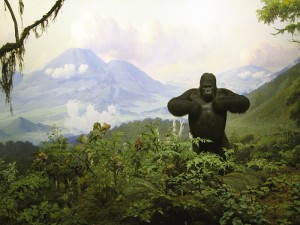 Since its opening in 1936, the Akeley Hall has been considered by many to be one of the world’s greatest museum displays. The hall is named after Carl Akeley (1864–1926), the explorer, conservationist, taxidermist, sculptor and photographer who conceived of, designed and created the hall. Akeley led teams of scientists and artists on three expeditions to Africa during the first two decades of the 20th century, wherein he and his colleagues carefully studied, catalogued, and collected the plants and animals that even then were disappearing. He brought many specimens from the expeditions back to the Museum, and used them to create the hall, with its twenty-eight dioramas.

The dioramas do not simply evoke the sites that Akeley visited—they replicate specific animals in specific geographic locations at a specific time. In creating these works, Akeley forever changed the practice of taxidermy—the stuffing and mounting of the skins of animals. Until then animal skins had been stuffed with straw or wood shavings. Akeley, however, began by re-creating the animal’s shape with an armature made of wood, wire, and sometimes parts of the actual skeleton. He then used clay to add on each muscle, tendon, and vein. When this work was complete, he made a cast of it, and fit the animal’s skin over the cast. This meticulous attention to veracity—which was applied not merely to the taxidermic mounts but the plants, background paintings and even the light in the dioramas—resulted in fastidiously realistic, vivid reproductions of the world that Akeley wanted to preserve.

During Akeley’s final expedition, he fell ill and died. He was buried in Albert National Park (now Virunga National Park), the first wildlife sanctuary in central Africa, which he had helped to establish. The mountain location of his grave is near the scene depicted in the gorilla diorama in this hall. 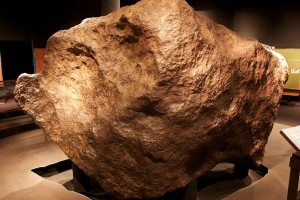 The Arthur Ross Hall of Meteorites contains some of the finest specimens in the world including Ahnighito, a section of the 200 ton Cape York meteorite which was found at the location of the same name in Greenland. The meteorite’s great weight—at 34 tons, makes it the largest meteorite on display at any museum in the world—requires support by columns that extend through the floor and into the bedrock below the Museum.

The hall also contains extra-solar nanodiamonds (diamonds with dimensions on the nanometer level) more than 5 billion years old. These were extracted from a meteorite sample through chemical means, and they are so small that a quadrillion of these fit into a volume smaller than a cubic centimeter. 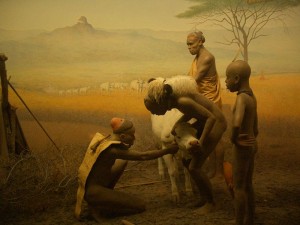 The Bernard and Anne Spitzer Hall of Human Origins, formerly The Hall of Human Biology and Evolution, opened on February 10, 2007.  Originally known under the name “Hall of the Age of Man”, at the time of its original opening in 1921 it was the only major exhibition in the United States to present an in-depth investigation of human evolution.  The displays traced the story of Homo sapiens, illuminated the path of human evolution and examined the origins of human creativity.

Many of the celebrated displays from the original hall can still be viewed in the present expanded format. These include life-size dioramas of our human predecessors Australopithecus afarensis, Homo ergaster, Neanderthal, and Cro-Magnon, showing each species demonstrating the behaviors and capabilities that scientists believe they were capable of. Also displayed are full-sized casts of important fossils, including the 3.2-million-year-old Lucy skeleton and the 1.7-million-year-old Turkana Boy, and Homo erectus specimens including a cast of Peking Man.

The hall also features replicas of ice age art found in the Dordogne region of southwestern France. The limestone carvings of horses were made nearly 26,000 years ago and are considered to represent the earliest artistic expression of humans.

The Harry Frank Guggenheim Hall of Minerals houses hundreds of unusual geological specimens. It adjoins the Morgan Memorial Hall of Gems showcasing many rare, and valuable gemstones. The exhibit was designed by the architectural firm of Wm. F. Pedersen and Assoc. with Fred Bookhardt in charge. Vincent Manson was the curator of the Mineralogy Department. The exhibit took six years to design and build, 1970–1976. The New York Times architectural critic, Paul Goldberger, said, “It is one of the finest museum installations that New York City or any city has seen in many years.”

On display are many renowned samples that are chosen from among the Museum’s more than 100,000 pieces. Included among these are the Patricia Emerald, a 632 carat (126 g), 12 sided stone that is considered to be one of the world’s most fabulous emeralds. It was discovered during the 1920s in a mine high in the Colombian Andes and was named for the mine-owner’s daughter. The Patricia is one of the few large gem-quality emeralds that remains uncut.  Also on display is the 563 carat (113 g) Star of India, the largest, and most famous, star sapphire in the world. It was discovered over 300 years ago in Sri Lanka, most likely in the sands of ancient river beds from where star sapphires continue to be found today. It was donated to the Museum by the financier J.P. Morgan. The thin, radiant, six pointed star, or asterism, is created by incoming light that reflects from needle-like crystals of the mineral rutile which are found within the sapphire. The Star of India is polished into the shape of a cabochon, or dome, to enhance the star’s beauty. Among other notable specimens on display are a 596 pound (270 kg) topaz, a 4.5 ton specimen of blue azurite/malachite ore that was found in the Copper Queen Mine in Bisbee, Arizona at the start of the 20th century; and a rare, 100 carat (20 g) orange-colored padparadschan sapphire from Sri Lanka, considered “the mother of all pads.”  The collection also includes the Midnight Star Ruby, a 116.75-carat deep purplish-red star ruby.

On October 29, 1964, the Star of India, along with several other precious gems including the Eagle Diamond and the de Long Ruby, was stolen from the Museum.  The burglars, who included Jack Murphy, gained entrance by climbing through a bathroom window they had unlocked hours before the Museum was closed. The Star of India and other gems were later recovered from a locker in a Miami bus station, but the Eagle Diamond was never found; it may have been recut or lost.