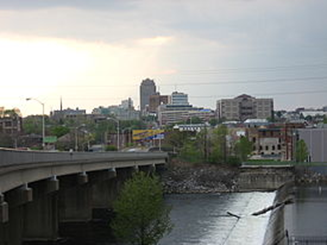 Located on the Lehigh River, Allentown is the largest of three adjacent cities that make up a region of eastern Pennsylvania and western New Jersey known as the Lehigh Valley, Allentown is 60 miles (97 km) north of Philadelphia, the fifth most populouscity in the United States, 80 miles (130Â km) east of Harrisburg, the state capital, and 90 miles (140Â km) west of New York City, the nation’s largest city.

Two four-year colleges, Cedar Crest College and Muhlenberg College, are located in Allentown. Dorney Park and Wildwater Kingdom, a very popular amusement park, is located just outside of the city.

The city is connected to the Interstate Highway System by Interstate 78 and Interstate 476, the Northeast Extension of the Pennsylvania Turnpike, which provide access connections to the major urban areas of other Northeastern United States urban areas. Also U.S. Route 22, the Lehigh Valley Thruway, provides a limited access east-west highway connection to the Interstate Highway System to the northern parts of the city. Commuter train service between Allentown and Philadelphia ended in 1979 when state funding to operate the service ceased.