You are here: Home / Education / Women Who Made History / African Union Fires Ambassador To U.S., Arikana Chihombori-Quao for just Speaking Out by Eyder Peralta 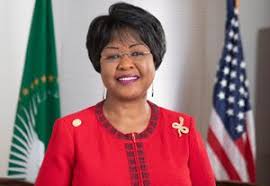 The African Union fired its U.S. ambassador this month. Her supporters say it was because of her anti-colonial speeches. However, a recent AU internal report alleges abuse of funds and office.

The African Union has ended the term of its charismatic and outspoken ambassador to the United States. Tens of thousands have come to her defense, claiming she’s been unfairly targeted for her anti-colonial speech. But an internal investigation report obtained by NPR paints a different picture of the ambassador, one of a rogue, corrupt and self-dealing diplomat. Here’s NPR’s Eyder Peralta.

EYDER PERALTA, BYLINE: On her final day on the job in Washington, D.C., Dr. Arikana Chihombori-Quao is defiant. She speaks about how colonial powers, like France, continue to pillage Africa.

ARIKANA CHIHOMBORI-QUAO: No more shall we continue to be exploded.

CHIHOMBORI-QUAO: France can no longer take 500 billion out of Africa.

PERALTA: Dr. Quao served more than three years as ambassador, and she had become quite popular among the African diaspora. When her term was ended by the African Union last month, almost 90,000 people signed an online petition asking the AU to reinstate her. The petition claims that she was fired because of that kind of speech and called her dismissal unjust. But an internal investigation by the African Union alleges that Dr. Quao misappropriated funds, that she created a toxic environment for her staff and that she fundraised for personal projects using the African Union name.

Reached by phone, Dr. Quao calls the investigation a sham and a witch hunt. She says she used ticket proceeds to pay members of the diaspora who had experience putting together events like these.

CHIHOMBORI-QUAO: I don’t think even one of them got a thousand dollars – for four months of working.

PERALTA: The investigation also found that a $10,000 grant from Chevron was never accounted for. Dr. Quao says that money never came to the African Union. She says when she became ambassador, she found an office in disarray.

CHIHOMBORI-QUAO: The problem was you are dealing with an office with staff that had no clue. That was really the problem with this mission.

PERALTA: She says she tried to make the mission more dynamic. But the staff, she says, always resisted her. She says when an auditor came in, he believed the staff and not her. In her view, this investigation was the staff’s attempt to railroad her.

CHIHOMBORI-QUAO: They don’t come to work. When I am out of town, they don’t show up at all. And they are stealing, by the way – stealing – frivolous claims for education, frivolous for health care. It is a horrible office. The staff is stealing money – no question about it. To read more go to the link below: