You are here: Home / Historical Movies / Media / Affair in Trinidad 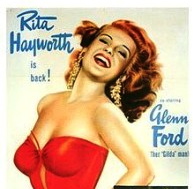 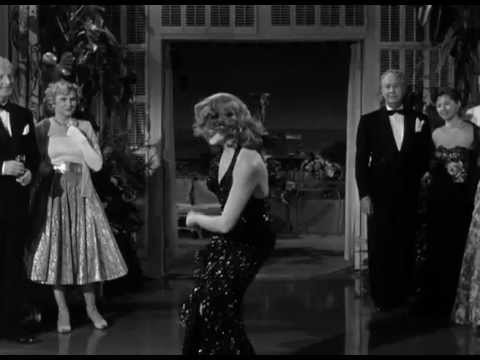 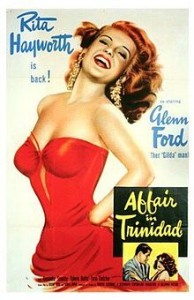 Plot Affair in Trinidad (1952) is a film produced by Hayworth’s Beckworth Corporation, released by Columbia Pictures, and starring Rita Hayworth and Glenn Ford. It is notable as Hayworth’s “comeback” film after four years away from Columbia, as a re-teaming of the Gilda (1946) co-stars, and for a fiery opening number danced bare-footed by Hayworth to calypso music.   Hayworth’s singing voice is dubbed by Jo Ann Greer, who later also sang for her in Miss Sadie Thompson and Pal Joey. The film’s gross take at the box office exceeded Gilda‘s by one million dollars.

The film is set in Trinidad while it was still a British colony. Chris Emery (Rita Hayworth) works as a nightclub singer and dancer. One night after her performance she receives news from Inspector Smythe (Torin Thatcher) and Anderson (Howard Wendell), a member of the American consulate, that her husband Neil was found dead. She is comforted by Neil’s friend Max Fabian (Alexander Scourby).

Initially, the police conclude that Neil committed suicide based on his gunshot wound and due to a pistol at the crime scene. On further investigation they discover that Neil was in fact murdered. Inspector Smythe and Anderson take Chris into confidence and inform her that Neil’s boat was seen outside Fabian’s property at the time of his murder. Chris learns that Fabian is in fact a crook who has built his fortune by trading information and aiding in treason and that Neil could have been murdered due to his involvement in Fabian’s latest project. Chris agrees to exploit Fabian’s love for her to gather information for the police.

Meanwhile Neil’s brother Steve Emery (Glenn Ford) arrives in Trinidad at the request of his brother who had written to him about a prospective job. He is shocked to learn that his brother committed suicide shortly after writing to him and sets out to investigate matters on his own. After the inquest Chris and Steve spend some time together. Though she starts falling in love with Steve, Chris is unable to reveal to him her motive behind getting friendly with Fabian.

As Chris inches closer to discovering the truth about Fabian, Steve gathers proof of Fabian’s involvement in Neil’s death. This leads to a showdown in the climax.