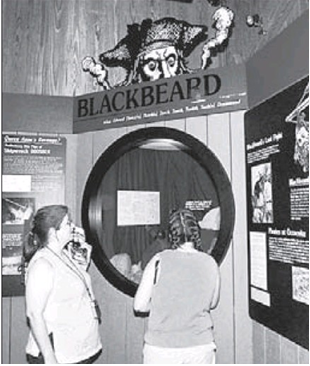 BETWEEN 1716 and 1718, the infamous pirate Blackbeard and his crew pillaged and plundered the Atlantic Ocean and the Caribbean Sea, often stealing the ships right along with their cargo.

Visitors learn about the life of Blackbeard at the

But on November 22, 1718, Blackbeards reign of terror came to an end in a swashbuckling blaze of glory.

Blackbeard was born Edward Teach in England, and nicknamed himself for the frightening appearance he cultivated a long black beard, braided and tied with black ribbons, that nearly covered his face. He put burning ropes in his hat so that smoke would rise from his head during battle. He draped his tall, thin frame in a red robe, holsters of knives and pistols strapped across his chest, two swords at his waist.

Blackbeard was as smart as he was sinister. He attacked at dawn or dusk, when it was difficult for ships at sea to discern each other in the hazy light. He would raise the same national flag as that of his target ship, tricking his prey into thinking the pirate ship was friendly.

Ships often surrendered to Blackbeard without a fight. When they resisted, Blackbeard and his crew would board the ship, strip it of all valuables and cargo, then strand the crew or passengers, either stealing the actual ship or setting it on fire. Blackbeard stole more than 50 ships in his lifetime, at one point commanding a fleet of four pirate ships and 300 pirates.

Blackbeard made his home in the Outer Banks, a string of barrier islands off the coast of North Carolina. The locals tolerated their resident outlaw because the stolen goods he sold in town were much cheaper than the ones imported from England.

But in November of 1718, Alexander Spotswood, the colonial governor of Virginia, saw the perfect chance to put Blackbeard out of business for good.

Blackbeard was hosting a week-long pirate bash on the beach of North Carolinas Ocracoke Island. Spotswood dispatched the Royal Navy, commanded by Lt. Robert Maynard. When Blackbeard saw the navy ships off the coast, he forced the navy to chase him into a narrow channel. Blackbeard knew how to navigate the channel, but the navy sloops crashed into a sandbar.

Blackbeard fired cannons and tossed grenades at the navy ship, and then he and his crew boarded the ship, believing they had killed everyone on board. But Lt. Maynard and his crew were alive. As the pirates and seamen battled, Lt. Maynard shot Blackbeard in the chest. When Blackbeard, still alive, raised his cutlass to take a slice at Maynard, another seaman slit Blackbeards throat. Maynards crew beheaded Blackbeard and hung his head from the bow of their ship as a warning to other pirates.

With Blackbeard gone, the hunt was on for the treasure everyone assumed this rapacious pirate had stashed away. Yet despite nearly three centuries of treasure hunting, Blackbeards booty has never been found.