You are here: Home / Democracy Now! / Media / A New McCarthyism 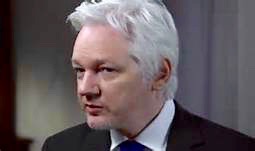 As President Trump’s presidency nears its first 100 days, Trump and his campaign are facing multiple investigations over whether the campaign colluded with Russian officials to influence the 2016 presidential election. In a Democracy Now! exclusive, we speak with a man who has been at the center of much discussion of Russian election meddling: Julian Assange, the founder of WikiLeaks.

Just before the Democratic National Convention last July, WikiLeaks published 20,000 internal emails from the Democratic National Committee. Then, between October 7 and Election Day, WikiLeaks would go on to publish 20,000 of Clinton campaign chair John Podesta’s emails, generating a rash of negative stories about the Clinton campaign. Intelligence agencies have pinned the email hacking on Russians. WikiLeaks maintains Russia was not the source of the documents.

For more, we speak with Julian Assange from the Ecuadorean Embassy in London.

JUAN GONZÁLEZ: Today we spend the hour with Julian Assange, the founder of WikiLeaks. It’s been nearly five years since he entered the Ecuadorean Embassy in London seeking political asylum, fearing a Swedish arrest warrant could lead to his extradition to the United States. Despite being holed up in the embassy, Assange’s impact is still being felt across the globe. His asylum case recently became an issue in the Ecuadorean presidential election. The right-wing candidate, Guillermo Lasso, had vowed to remove Assange from the embassy if he won. But Lasso lost to President Rafael Correa’s former vice president, Lenín Moreno, who said Assange is welcome to stay.

Meanwhile, WikiLeaks recently began releasing a massive trove of secret CIAdocuments, exposing how the agency has developed tools to hack into and spy on personal phones, computers and televisions all over the world. WikiLeaks described the leak as the largest-ever release of confidential documents on the CIA.

AMY GOODMAN: WikiLeaks’ activity before the 2016 election is also still generating headlines. Just before the Democratic National Convention last July, WikiLeaks published 20,000 internal emails from the Democratic National Committee. Within two days, the head of the DNC, Debbie Wasserman Schultz, resigned her post, in part because the emails showed the DNC worked behind the scenes to discredit and defeat Bernie Sanders, who was challenging Hillary Clinton for the nomination. Less than three months later, WikiLeaks began publishing internal emails from Clinton’s campaign chairman, John Podesta. Soon, Donald Trump was praising WikiLeaks on the campaign trail.

AMY GOODMAN: Between October 7th and Election Day, WikiLeaks would go on to publish 20,000 of Podesta’s emails, generating a rash of negative stories about the Clinton campaign.

JUAN GONZÁLEZ: U.S. intelligence agencies have accused Russia of hacking the DNC and Podesta accounts, but many questions still remain about what happened. During a recent congressional hearing, FBI Director James Comey placed the blame on Russia intelligence when questioned by Congressman Adam Schiff.

REP. ADAM SCHIFF: Do you know whether the Russian intelligence services dealt directly with WikiLeaks or whether they, too, used an intermediary?

JAMES COMEY: We assess they used some kind of cutout. They didn’t deal directly with WikiLeaks, in contrast to DC Leaks and Guccifer 2.0.

Well, joining us now from the Ecuadorean Embassy in London is Julian Assange, the founder of WikiLeaks.

Julian, welcome back to Democracy Now!

AMY GOODMAN: Did Russia leak the documents, either the DNC documents or the John Podesta emails, to WikiLeaks?

JULIAN ASSANGE: We have said quite clearly that our source is not a member of any state, including the Russian government. Now, if you look at these statements by James Comey, James Clapper, going back a couple of months, statements by Barack Obama, they all are harmonious with our description. Now, what—what the U.S. investigation by James Comey seems to be trying to say, at least in public, is that they perceive that there was some Russian hacking, or at least some hacking from somewhere, of the DNC, other institutions in the United States. In fact, the allegations are that several thousands of people were hacked in those operations.

JULIAN ASSANGE: We look very closely at our publications. We tend to come to a good understanding of them. And so, we’re not willing to go into details about our source, because it might describe the sort of person they are, the sort of jurisdiction that they’re in, which could put them at risk. But we have said clearly that our source is not a member of the Russian state. And even the U.S. government is not suggesting that our source is a member of the Russian state.

And what appears to be going on is that there have been observations of hacking of thousands of people or attempted hacking of thousands of people. That’s quite normal in intelligence gathering activity before an election. Presumably, that’s been carried out by many states. I would be surprised if that doesn’t include Russia. And over here, there’s the publications of WikiLeaks. And what there isn’t is something in between the middle. So, there’s an allegation that, well, if there’s been hacking here, and there’s publication over here, then these must be directly, causally, intentionally related. But so far, there’s no evidence for that.

JUAN GONZÁLEZ: Julian, I want to turn to Democratic Congressman Adam Schiff speaking at a hearing of the House Intelligence Committee last month.

REP. ADAM SCHIFF: Later in July and after the convention, the first stolen emails detrimental to Hillary Clinton appear on WikiLeaks. A hacker who goes by the moniker Guccifer 2.0 claims responsibility for hacking the DNC and giving the documents to WikiLeaks. The leading private cybersecurity firms, including CrowdStrike, Mandiant and ThreatConnect, reviewed the evidence of the hack and conclude, with high certainty, that it was the work of APT 28 and APT 29, who are known to be Russian intelligence services. The U.S. intelligence community also later confirms that the documents were in fact stolen by Russian intelligence, and Guccifer 2.0 acted as a front. Also in late July, candidate Trump praises WikiLeaks, says he loves them, and openly appeals to the Russians to hack his opponent’s emails, telling them that they will be richly rewarded by the press.

JUAN GONZÁLEZ: That was Congressman Adam Schiff. Julian, I’m wondering if you could respond to some of the things he’s saying in that statement?

JULIAN ASSANGE: Well, Mr. Schiff is a Democratic congressman who’s trying to whip up a kind of neo-McCarthyist fervor in order to distract from the epic failure of Hillary Clinton and that team when they lost, of all people, to Donald Trump. So, it’s not particularly interesting.

I think we should pull back and put things in context. The United States government, since 1950, has intervened in 81 elections—interfered, to use Schiff’s language, in 81 elections. That is not including coups, which have overthrown the government. So there’s a long history of the United States doing this to places around the world, in infamous ways, and, most recently, alleged interference in the election of Israel. So, I think we should understand that the United States is in a glass house when it comes to allegations of attempting to interfere with or influence election results.

But let’s look at what is the real meat of this issue. How is it alleged that Russia has interfered in the U.S. election process? While they say there’s been a variety of hacks, well, that’s quite normal intelligence gathering process, as far as can be determined, and a few extremely ineffectual websites, such as DC Leaks or Guccifer 2.0, that no one really paid any attention to, and then there’s our publications, which people really did pay attention to.

Now, what is in our publications? Well, from our perspective, we have just published, accurately and fairly, what Hillary Clinton said her positions were, in her secret speeches to Goldman Sachs and in relation to the DNC and its attempt to rig the election to exclude the primary—primary person, sorry, to exclude Bernie Sanders. So, at the heart of this issue is whether people were told the truth about Hillary Clinton and the DNC. If there hadn’t been an ugly truth there, it wouldn’t have made any difference. There was an ugly truth. And we published, accurately and fairly, that ugly truth. Now, our source wasn’t from the Russian state. But if it had been from a state, would we have suppressed that information before an election, or would we have accurately and fairly published it? Of course we would have published it.

JUAN GONZÁLEZ: Well, but, Julian, I wanted to ask you, in relations to what you said, we’ve had other guests on, for instance, Scott Horton, who said, yes, you’re absolutely right, the United States has been involved in seeking to destabilize governments and overthrow governments all over the world. But Horton said that there’s a difference between what Russia attempted to do and whether anyone in the Trump administration colluded with Russia or helped or cooperated or had conversations with the Russians as they were seeking to destabilize the U.S. elections. And Scott Horton says that would be definitely a problematic issue for Trump. I’m wondering your thoughts about that?

JULIAN ASSANGE: I would agree. That would be interesting and unusual. I don’t think it’s true. I think it is interesting that, early on, that Trump and people around him took a position of rapprochement towards Russia, very strong position of rapprochement towards Russia, and not a classically Republican position. I think that is interesting. It is somewhat compatible with Trump’s statements going back a very long time.

But I would be surprised if that turns out to be significant. Why do I say that? Well, Trump had very little business success in Russia. He hasn’t managed to build a hotel in Russia. He hasn’t gotten any—as far as can be determined, any good deals in Russia. And when you see him making statements during the election campaign on the stage—”Hey, Russia, if you’ve got those emails, give them to our—give them to the press. They’ll be very pleased about it”—when you see statements like that, this is not the sort of statement that you make if you are already—if you already have a communications channel and you’re already engaged in an active conspiracy. For people like Paul Manafort, that’s someone who’s perfectly capable of engaging in—in, well, let’s say, dodgy activities. They have a long history of working for various parties in different ways. Have they asked for support through Paul Manafort? Maybe. But if you’re looking at the top level, involving Trump, what I see is a great weakness, an inability to get anything concretely done in Russia. To read more go to the link below.