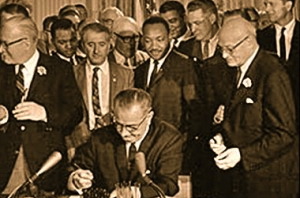 Fifty years since the Voting Rights Act of 1965 became law, we still have much more work to do to protect the right to vote. We have a choice to make: either we come together to repair the Voting Rights Act and renew the promise of our democracy, or we let even more of the progress we’ve made slip away. 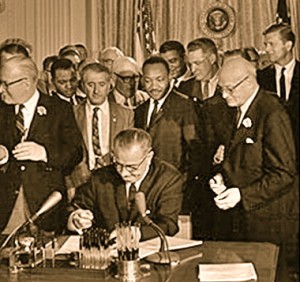 In 2013, the Equal Justice Society launched a three-year campaign observing the 50th anniversaries of four of our nation’s civil rights tipping points.

Aug. 28, 2013: 50th Anniversary of the March on Washington – About 200,000 people join the march and congregate at the Lincoln Memorial to hear Dr. Martin Luther King, Jr. delivers his famous “I Have a Dream” speech in 1963. Medgar Evers is assassinated and four young Black girls are killed in a bomb attack in Birmingham the same year. President Kennedy is assassinated in November 1963. The Equal Justice Society commemorated the 50th anniversary of the March on Washington on Wednesday, August 28, 2013, at the Oakland Museum.

July 2, 2014: 50th Anniversary of the Civil Rights Act of 1964 – The most sweeping civil rights legislation since Reconstruction, the Civil Rights Act prohibits discrimination of all kinds based on race, color, religion, or national origin. The law also provides the federal government with the powers to enforce desegregation. Earlier in 1964, the 24th Amendment abolishes the poll tax, originally instituted in 11 southern states to make it difficult for blacks to vote. The Equal Justice Society commemorated the 50th anniversary of the Civil Rights Act of 1964 on September 13, 2014, at Yerba Buena Center for the Arts. 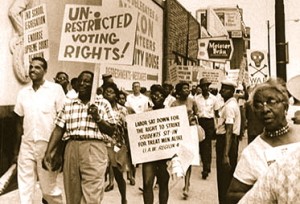 Aug. 10, 2015: 50th Anniversary of the Voting Rights Act of 1965 – This Act made it easier for Southern Blacks to register to vote. Literacy tests, poll taxes, and other such requirements that were used to restrict black voting are made illegal. This same year, Malcolm X is assassinated, the Selma to Montgomery marches take place, the Watts riots erupt in Los Angeles, and President Johnson issues Executive Order 11246, which enforces affirmative action for the first time. Plans are underway for our 2015 event. Subscribe to our email list to be notified of event details.

Oct. 3, 2015: 50th Anniversary of the Immigration & Nationality Act of 1965 – The act marked a radical break from the immigration policies of the past. The law as it stood then excluded Asians and Africans and preferred northern and western Europeans over southern and eastern ones. At the height of the civil rights movement of the 1960s the law was seen as an embarrassment by, among others, President John F. Kennedy, who called the then-quota-system “nearly intolerable.” After Kennedy’s assassination, President Lyndon Johnson signed the bill at the foot of the Statue of Liberty as a symbolic gesture. Plans are underway for our 2015 event. Subscribe to our email list to be notified of event details.