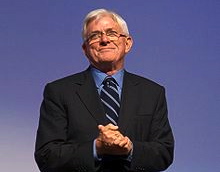 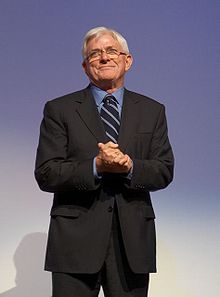 Phil Donahue at the Toronto International Film Festival in 2007

Phillip John “Phil” Donahue (born December 21, 1935) is an American media personality, writer, and film producer best known as the creator and host of The Phil Donahue Show. The television program, also known as Donahue, was the first talk show format that included audience participation. The show had a 29-year run on national television in America that began in Dayton, Ohio, and ended in New York City in 1996.

His shows have often focused on issues that divide liberals and conservatives in the United States, such as abortion, consumer protection, civil rights and war issues. His most frequent guest was Ralph Nader, for whom Donahue campaigned in 2000.  Donahue also briefly hosted a talk show on MSNBC from July 2002 to March 2003. In 1996, Donahue was ranked #42 on TV Guide’s 50 Greatest TV Stars of All Time.

Oprah Winfrey said “if it weren’t for Phil Donahue, there never would have been an Oprah Show!” 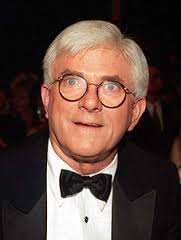 Donahue was born into a middle-class, churchgoing, Irish Catholic family in Cleveland, Ohio; his father, Phillip Donahue, was a furniture sales clerk and his mother, Catherine (McClory), a department store shoe clerk.  In 1949, he graduated from Our Lady Of Angels elementary school in the West Park neighborhood of Cleveland. In 1953, Donahue was a member of the first graduating class of St. Edward High School, an all-boys college prep Catholic private high school run by the Congregation of Holy Cross in suburban Lakewood, Ohio. He graduated from the University of Notre Dame, which is also run by the Congregation of Holy Cross, with a B.B.A in 1957.

Donahue began his career in 1957 as a production assistant at KYW radio and television in Cleveland. He got a chance to become an announcer one day when the regular announcer failed to show up. After a brief stint as a bank check sorter in Albuquerque, New Mexico, he became program director for WABJ radio in Adrian, Michigan, soon after graduating. He moved on to become a stringer for the CBS Evening News and later, an anchor of the morning newscast at WHIO-TV in Dayton, Ohio, where his interviews with Jimmy Hoffa and Billie Sol Estes were picked up nationally. While in Dayton, Donahue also hostedConversation Piece, a phone-in afternoon talk show from 1963 to 1967 on WHIO radio. In Dayton, Donahue interviewed presidential candidate John F. Kennedy, late night talk show host Johnny Carson, human rights activist Malcolm X and Vietnam war opponents including Jerry Rubin.  In Chicago and New York, Donahue interviewed Elton John, heavyweight boxing champions Muhammad Ali and Joe Frazier, and author and political activist Noam Chomsky.

On November 6, 1967, Donahue left WHIO, moving his talk program to television withThe Phil Donahue Show on WLWD (now WDTN), also in Dayton. Initially, the program was shown only on other stations owned by the Crosley Broadcasting Corporation (which would later take the name of its parent Avco Company), which also owned WLWD. But, in January 1970, The Phil Donahue Show entered nationwide syndication. Donahue’s syndicated show moved from Dayton, Ohio, to Chicago in 1974; then in 1984, he moved the show to New York City to be near his wife Marlo Thomas.

After a 29-year run—26 years in syndication—and nearly 7,000 one-hour daily shows, the final original episode of Donahue aired on September 13, 1996, culminating what remains the longest continuous run of any syndicated talk show in U.S. television history. Donahue will continue to remain the longest continuously running syndicated talk show until at least 2015, if or when Live! with Kelly and Michael completes its 27th season in national syndication. If Live does not complete a 27th season, Maury and Jerry Springer would both pass in 2018, having both been on the air since 1991.

He is known for giving birth to “shock journalism”, opening the doors as a pioneer to the aforementioned TV hosts.

While hosting his own program, Donahue also appeared on NBC‘s The Today Show as a contributor, from 1980 until 1982. From 1991 to 1994 he also co-hosted Pozner/Donahue, a weekly, issues-oriented roundtable program with Soviet journalist Vladimir Pozner, which aired both on CNBC and in syndication. 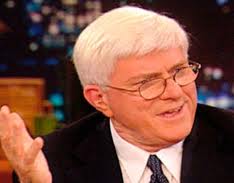 In the 1980’s, at the height of the Cold War, Donahue and Russian journalist Vladimir Pozner co-hosted a series of televised discussions, known as the U.S.–Soviet Space Bridge, among everyday citizens of the Soviet Union and the United States.  It was the first event of its kind in broadcasting history: Donahue hosted an audience in an American city while Pozner hosted an audience in a Soviet city, all on one television program. Members of both audiences asked each other questions about both nations. While the governments of both nations were preparing for nuclear war, Donahue said: “We reached out instead of lashed out.” Donahue and Pozner have been friends ever since.

In July 2002, Phil Donahue returned to television after seven years of retirement to host a show called Donahue on MSNBC. On February 25, 2003, MSNBC canceled the show, citing his opposition to the imminent invasion of Iraq by the United States military. Donahue was the highest rated show on MSNBC at the time it was canceled, managing to beat Chris Matthews‘ MSNBC show Hardball in the ratings.  But Matthews was a big proponent of the Iraq invasion and he cultivated a good relationship with MSNBC’s management before Donahue came to the network. He played a crucial role in procuring the firing of Donahue and “saw himself as MSNBC’s biggest star, and he was upset that the network was pumping significant resources into Donahue’s show.”  In the fall of 2002, U.S. News & World Report ran a gossip item that had Matthews saying over lunch in Washington that if Donahue stays on the air, he could bring down the network.

Soon after the show’s cancellation, an internal MSNBC memo was leaked to the press stating that Donahue should be fired because he opposed the imminent U.S. invasion of Iraq and that he would be a “difficult public face for NBC in a time of war.”  Donahue commented in 2007 that the management of MSNBC, owned by military contractors General Electric and Microsoft, required that “we have two conservative (guests) for every liberal. I was counted as two liberals.”

Donahue continued to oppose the U.S. invasion and occupation of Iraq after MSNBC fired him. He participated in public marches and rallies against the occupation and even debated Fox News Channel’s Bill O’Reilly, who strongly supported the war.  During his 2005 appearance on O’Reilly’s show, he told O’Reilly, “In the last year, two things have doubled. The number of dead American troops in Iraq has doubled from over a thousand to almost two thousand. You know what also doubled, Billy? The price of Halliburton stock – from thirty-three to sixty-six dollars. That doesn’t shame you? That doesn’t make you wonder whether this is an enterprise that is worth the support of the American people?” (Halliburton Company, through its subsidiary KBR, received billions of dollars in government contracts to help manage the military’s occupation of Iraq.) Donahue continued, “There is no democracy without dissent.” 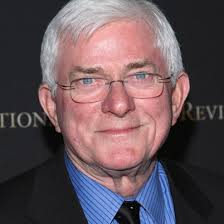 In 2006, Donahue served as co-director with independent filmmaker Ellen Spiro for the feature documentary film Body of War. The film tells the story of Tomas Young, a severely disabled Iraq War veteran and his turbulent postwar adjustments. In November 2007 the film was named as one of fifteen documentaries to be in consideration for an Oscar nomination from the Academy of Motion Picture Arts and Sciences.

Donahue was awarded nine Emmy Awards during his broadcasting career, and was inducted into the Academy of Television Arts & Sciences Hall of Fame on November 20, 1993. 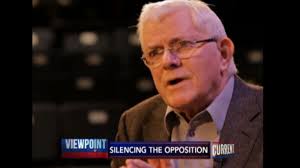 In 1958, he married his first wife Margaret Cooney, but they divorced in 1975. They have five children. He married his second (and present) wife, actress Marlo Thomas (daughter of Danny Thomas), in 1980. They live in New York City and have owned a home in Westport, Connecticut, since 1986.

Donahue admits he’s not “a very good Roman Catholic” and he did not think it was necessary to have his first marriage annulled. He has elaborated that “I will always be a Catholic. But I want my church to join the human race and finally walk away from this antisexual theology.”  In the 1980s, Donahue was the first national television program to reveal widespread child molestation by Catholic priests, something for which he was widely criticized.  In 2002 he told Oprah Winfrey, “I once did a priest pedophilia show on St. Patrick’s Day, and a priest called in and said, ‘How am I supposed to work on a playground with children?’ When I was a kid, we used to have a sin called giving scandal, which meant criticizing the church. And that’s exactly how we got where we are now.”

On November 10, 2010, Oprah Winfrey invited Donahue, along with former talk show hosts Sally Jessy Raphael, Geraldo Rivera, Ricki Lake and Montel Williams, as a guest on her show. This was the first time that she had fellow talkers appear together since their programs left the air.

In June 2013, Donahue and numerous other celebrities appeared in a video showing support for Bradley Manning.