The forum will bring together almost all of the 17 major Republican candidates for president for a debate-lite event, which unlike Thursday’s nationally televised debate in Cleveland doesn’t have a cut-off for participation.

From the stand-out moments to the blows, here are the night’s top eight takeaways:

Like the wall he’s pledged to build along the U.S.-Mexico border, Donald Trump was immovable.

Trump proved yet again that he’s not going to back down from his bombastic rhetoric. The Republican frontrunner kicked off the debate by refusing — again — to rule out a third-party run and pledge his support to the Republican nominee, regardless of who takes the crown.

Is Florida better off after Jeb Bush was governor?

Instead, Trump said: “I can totally make the pledge if I’m the nominee.” 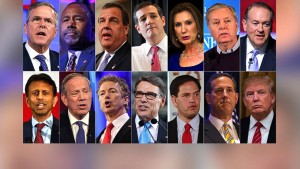 The moderators didn’t mince words with Trump: Asking him about calling some undocumented immigrants “rapists” and slamming women he’s previously sparred with as “fat pigs” and “slobs.”

“Only Rosie O’Donnell,” Trump interjected, before saying he doesn’t “frankly have time for total political correctness.”

But the result didn’t give voters much in the way of specifics on Trump’s policies, and he refused to do so when pressed on immigration by moderator Chris Wallace — instead saying “our leaders are stupid.”

No one outshines Donald Trump at GOP debate

Rand Paul was eager to grab headlines, jumping in even when he wasn’t called on to rebut another candidate’s point or lob attacks at Trump and New Jersey Gov. Chris Christie.

Paul jumped in immediately at the start of the debate to go after Trump’s refusal to rule out a third-party run, saying the billionaire “buys and sells politicians of all stripes” and accusing him of “hedging his bet on the Clintons.”

There’s no doubt Paul was trying to stand out, and perhaps even steal Trump’s thunder with the party’s base as he described himself as a “different kind of Republican” in his closing remarks.

While Trump didn’t go full-Donald to beat back the Kentucky senator’s attacks, New Jersey Gov. Chris Christie took advantage when given the opportunity to address his beef with Paul over national security.

Months after Rand Paul’s 10-and-a-half hour filibuster to block the NSA’s reauthorization — which prompted attacks from Christie — the pair showed Thursday that they will continue to grapple on the issue.

As the two squabbled, Christie slammed Paul for simply “blowing hot air” from the comfort of a Senate subcommittee. Paul fired back at Christie over his hugging of Obama right before the 2012 election. But Christie had the last word.

“Senator Paul, you know the hugs I remember are the hugs that I gave to the families who lost their people on September 11th,” Christie said.

It’s a sign that Christie will continue to be Paul’s foil on the campaign trail as the libertarian-leaning senator’s unorthodox national security and foreign policy positions continue to clash with the GOP mold.

For a guy who barely squeaked his way onto the debate stage, John Kasich’s main goal was to get his name out — and his home state helped him meet and exceed his goal.

Playing off a home-court advantage, Kasich deftly handled questions on the attacks Democrats would lob at him and took a pass on attacking Trump. And he did so with authenticity and while pivoting to his credentials as a budget hawk and his foreign policy resume.

Kasich insisted that Trump is “hitting a nerve in this country.”

“People are frustrated, they’re fed up,” Kasich said. “For people to just tune them out is a mistake.”

5. Jeb Bush: Rusty, but working on it

Bush started off his week stumbling in New Hampshire, pushed toward the debate with a major gaffe on women’s health care and teed off the debate Thursday stumbling through his answers yet again.

Bush — who has been out of the political glare for nearly a decade — appeared out of practice when fielding the first questions in the debate Thursday.

But he got stronger as the night went on, and began hitting his stride after he was asked about his pledge to bring 4% economic growth to the country and as he defended his work for a Michael Bloomberg nonprofit that gave money to Planned Parenthood.

However, Bush certainly didn’t prove himself as the unequivocal frontrunner that many in the Republican establishment once believed him to be, as other candidates like Kasich and Rubio proved their top-tier status as well.

Walker, who has consistently placed in second or third place in recent polls, didn’t come away with a big moment from the debate.

He stayed on message and delivered concise responses to the questions he was asked, but his responses were drab and he didn’t break out from the rest of the field.

Aside from Paul, the rest of the candidates largely avoided attacking Trump — several actually asked him for political donations in a light-hearted moment early on.

Instead, it was the second rung of candidates who debated at 5 p.m. who took swings at Trump while he was absent.

From former Texas Gov. Rick Perry to former Hewlett-Packard CEO Carly Fiorina, several of the so-called “happy hour debate” candidates swung at Trump for his policy positions and his association with the Clintons.

While the prime-time debate didn’t reveal any winners, Fiorina came away from the earlier debate as the clear victor, generating chatter on social media and buzz among political pundits.

She came away as the clear winner of that debate, stealing the spotlight from the six other lower-tier candidates with jabs at everyone from Trump to Bush and, of course, Hillary Clinton.