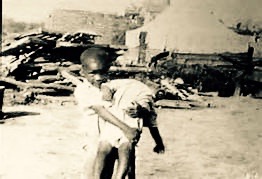 Before They Die! The chronicling of the 1921 Tulsa Oklahoma Race Riot

A documentary about the little talked about, nearly forgotten, savage attack on the Greenwood Oklahoma District known as “Black Wall Street” starting May 31st 1921. 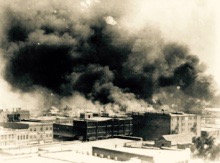 On May 31 and June 1, 1921, members of the white community of Greenwood in Tulsa, Oklahoma, participated in a riot, killing some 300 Black people. The attack, carried out on the ground and by air, destroyed more than 35 blocks of the district, then the wealthiest black community in the nation. More than 800 people were admitted to hospitals and more than 6,000 black residents were arrested and detained, some for as many as eight days. The official count of the dead by the Oklahoma Bureau of Vital Statistics was 39.

The riot was triggered over a Memorial Day weekend when a black man was accused of raping a young white woman elevator operator. One of the newspapers allegedly editorialized that the youth ought to be hanged. Rumors raced through the black community that a lynch mob was planning to hang the youth. A group of armed African-American men rushed to the police station with the intention of preventing a lynching from occurring. There was no lynch mob but a confrontation developed between blacks and whites; shots were fired and some whites and blacks were killed. As the news spread throughout the city, mob violence exploded. Thousands of whites rampaged through the black community, killing men and women, burning and looting stores and homes. Some blacks claimed that policemen had joined the mob; others claimed that a machine gun was fired into the black community and a plane dropped sticks of dynamite. In an eyewitness account discovered in 2015, Greenwood attorney Buck Colbert Franklin describes watching a dozen or more airplanes drop burning balls of turpentine on the city’s rooftops. None of the area’s half-dozen fire stations sounded an alarm, and Franklin remembers wondering, “’Is the city in conspiracy with the mob?’” In 2001, 80 years after the massacre, the state-appointed Tulsa Race Riot Commission recommended reparations to survivors and their descendants because the city had, indeed, conspired with the mob.

The events of the massacre were long omitted from local and state histories: “The Tulsa race riot of 1921 was rarely mentioned in history books, classrooms or even in private. Blacks and whites alike grew into middle age unaware of what had taken place.” With the number of survivors declining, in 1996, the state legislature commissioned a report to establish the historical record of the events, and acknowledge the victims and damages to the black community. Released in 2001, the report included the commission’s recommendations for some compensatory actions, most of which were not implemented by the state and city governments. The state passed legislation to establish some scholarships for descendants of survivors, economic development of Greenwood, and a memorial park to the victims in Tulsa. The latter was dedicated in 2010. 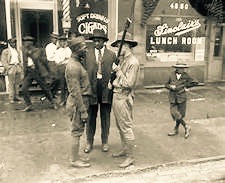 Post-World War I northeastern Oklahoma had a racially and politically tense atmosphere. The territory, which was declared a state on November 16, 1907, had received many settlers from the South who had been slaveholders before the American Civil War. In the early 20th century, lynchings were common in Oklahoma, as part of a continuing effort by whites to assert and maintain white supremacy. Between the declaration of statehood and the Tulsa race riot 13 years later, 31 persons were lynched in Oklahoma; 26 were black and nearly all were men and boys. During the twenty years following the riot, the number of lynchings statewide fell to two.

The newly created state legislature passed racial segregation laws, commonly known as Jim Crow laws, as one of its first orders of business. Its 1907 constitution and laws had voter registration rules that disenfranchised most blacks; this also barred them from serving on juries or in local office, a situation that lasted until the federal Voting Rights Act of 1965, part of civil rights legislation passed by the U.S. Congress. Major cities passed their own restrictions.

On August 16, 1916, Tulsa passed an ordinance that mandated residential segregation by forbidding blacks or whites from residing on any block where three-fourths or more of the residents were of the other race. Although the United States Supreme Court declared the ordinance unconstitutional the next year, it remained on the books.

As cities absorbed returning veterans into the labor market following World War I, social tension and anti-black sentiment increased. At the same time, black veterans pushed to have their civil rights enforced, believing they had earned full citizenship by military service. In what became known as the “Red Summer” of 1919, industrial cities across the Midwest and North experienced severe race riots, often led by ethnic whites among recent immigrant groups, who competed mostly with blacks for jobs. In Chicago and some other cities, blacks defended themselves for the first time with force but were outnumbered.

Northeastern Oklahoma was in an economic slump that increased unemployment. Since 1915, the Ku Klux Klan had been growing in urban chapters across the country, particularly since veterans had been returning from the war. Its first significant appearance in Oklahoma occurred on August 12, 1921, less than three months after the Tulsa riot. By the end of 1921, Tulsa had 3,200 residents in the Klan by one estimate. The city’s population was 72,000 in 1920.

The traditionally black district of Greenwood in Tulsa had a commercial district so prosperous that it was known as “the Negro Wall Street” (now commonly referred to as “the Black Wall Street”). Blacks had created their own businesses and services in this enclave, including several groceries, two independent newspapers, two movie theaters, nightclubs, and numerous churches. Black professionals—doctors, dentists, lawyers, and clergy—served the community. Because of residential segregation in the city, most classes of blacks lived together in Greenwood. They selected their own leaders and raised capital there to support economic growth. In the surrounding areas of northeastern Oklahoma, blacks also enjoyed relative prosperity and participated in the oil boom.

Brief Investigation
Although the police likely questioned Page, no written account of her statement has surfaced. It is generally accepted that they determined what happened between the two teenagers was something less than an assault. The authorities conducted a rather low-key investigation rather than launching a man-hunt for her alleged assailant. Afterward, Page told the police that she would not press charges.

Regardless of whether assault had occurred, Rowland had reason to be fearful, as at the time, such an accusation alone put him at risk for attack. Realizing the gravity of the situation, Rowland fled to his mother’s house in the Greenwood neighborhood.

One of the sensationalist news articles that contributed to tensions in Tulsa
On the morning after the incident, Detective Henry Carmichael and Henry C. Pack, a black patrolman, located Rowland on Greenwood Avenue and detained him. Pack was one of two black officers on the city’s approximately 45-man police force. Rowland was initially taken to the Tulsa city jail at First and Main. Late that day, Police Commissioner J. M. Adkison said he had received an anonymous telephone call threatening Rowland’s life. He ordered Rowland transferred to the more secure jail on the top floor of the Tulsa County Courthouse.

Word quickly spread in Tulsa’s legal circles. As patrons of the shine shop where Rowland worked, many attorneys knew him. Witnesses recounted hearing several attorneys defending him in personal conversations with one another. One of the men said, “Why, I know that boy, and have known him a good while. That’s not in him.”

Newspaper Coverage
The Tulsa Tribune, one of two white-owned papers published in Tulsa, broke the story in that afternoon’s edition with the headline: “Nab Negro for Attacking Girl In an Elevator”, describing the alleged incident. According to some witnesses, the same edition of the Tribune included an editorial warning of a potential lynching of Rowland, and entitled “To Lynch Negro Tonight.” The paper was known at the time to have a “sensationalist” style of news writing. All original copies of that issue of the paper have apparently been destroyed, and the relevant page is missing from the microfilm copy, so the exact content of the column (and whether it existed at all) remains in dispute.

Stand-off at the Courthouse 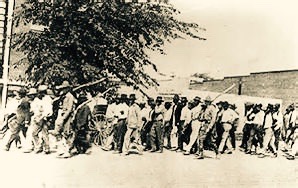 The afternoon edition of the Tribune hit the streets shortly after 3 p.m., and soon news of the potential lynching spread. By 4 pm, the local authorities were on alert. White people began congregating at and near the Tulsa County Courthouse. By sunset at 7:34 pm, the several hundred whites assembled outside the courthouse appeared to have the makings of a lynch mob. Willard M. McCullough, the newly elected sheriff of Tulsa County, was determined to avoid events such as the 1920 lynching of white murder suspect Roy Belton in Tulsa, which occurred during the term of his predecessor. The sheriff took steps to ensure the safety of Rowland. McCullough organized his deputies into a defensive formation around Rowland, who was terrified. The sheriff positioned six of his men, armed with rifles and shotguns, on the roof of the courthouse. He disabled the building’s elevator, and had his remaining men barricade themselves at the top of the stairs with orders to shoot any intruders on sight. The sheriff went outside and tried to talk the crowd into going home, but to no avail. According to an account by Scott Ellsworth, the sheriff was “hooted down.”

About 8:20 pm, three white men entered the courthouse, demanding that Rowland be turned over to them. Although vastly outnumbered by the growing crowd out on the street, Sheriff McCullough turned the men away.