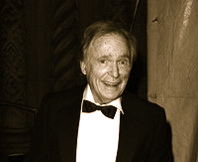 Brando on The Dick Cavett Show, June 12, 1973. With representatives of the Cheyenne, Paiute and Lummi tribes. 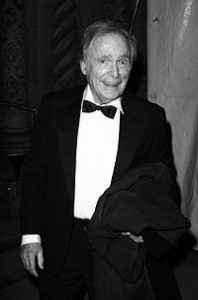 The Dick Cavett Show has been the title of several talk shows hosted by Dick Cavett on various television networks, including:

The Dick Cavett Show most often refers to the shows on ABC-TV that Dick Cavett hosted between 1968 and 1975 in New York. The first daytime show featured Gore Vidal, Muhammad Ali, and Angela Lansbury. ABC pressured Cavett to “get big names,” although subsequent shows without them got higher ratings and more critical acclaim. 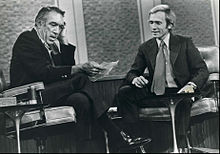 The late-night talk show that ran from December 29, 1969 to January 1, 1975 ran opposite NBC‘s The Tonight Show Starring Johnny Carson. Cavett took the time slot over from Joey Bishop. In addition to the usual monologue, Cavett opened each show reading selected questions written by audience members, to which he would respond with witty rejoinders. (“What makes New York so crummy these days?” “Tourists”).

While Cavett and Carson shared many of the same guests, Cavett was receptive to rock and roll artists to a degree unusual at the time, as well as authors, politicians, and other personalities outside the entertainment field. The wide variety of guests, combined with Cavett’s literate and intelligent approach to comedy, appealed to a significant enough number of viewers to keep the show running for several years despite the competition from Carson’s show.

The late-night show’s 45-minute midpoint would always be signaled by the musical piece “Glitter and Be Gay” from Leonard Bernstein‘s Candide. The Candide snippet became Cavett’s theme song, being used as the introduction to his later PBS series, and was played by the house band on his various talk show appearances over the last 30 years.

Typically each show had several guests, but occasionally Cavett would devote an entire show to a single guest. Among those receiving such special treatment (some more than once) were Groucho Marx, Laurence Olivier, Judy Garland, Katharine Hepburn (without an audience), Bette Davis, Orson Welles, Noël Coward (who appeared on the same show along with Alfred Lunt, Lynn Fontanne, Tammy Grimes, and Brian Bedford), John Lennon and Yoko Ono, Alfred Hitchcock, Fred Astaire, Woody Allen, Gloria Swanson, Jerry Lewis, Lucille Ball, Zero Mostel (“on some shows I’ve had just one guest, but tonight I have Zero”) and David Bowie. These shows helped showcase Cavett’s skills as a host who could attract guests that otherwise might not do interviews, at the expense of some of the excitement that might ensue from the multiple-guest format. 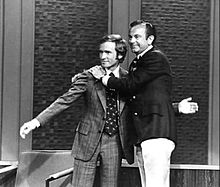 In January 1973, despite a vociferous letter campaign, ratings forced the show to be cut back to occasional status, airing one week a month under the umbrella title ABC’s Wide World of Entertainment. Jack Paar, who ABC had tried to recruit as Cavett’s successor, insisted that both he and Cavett get at least one week per month as a sign of respect for Cavett. By the end of 1974, it was airing only twice a month.

The PBS series featured single guests in a half-hour format and was produced by Christopher Porterfield, a former roommate of Cavett’s at Yale University who had coauthored the book Cavett published in August 1974. The show remained on the PBS lineup until affiliates voted it off the schedule in 1982.

On all three of the early ABC shows, the bandleader was Bobby Rosengarden and the announcer was Fred Foy of The Lone Ranger fame. The morning show was produced by Woody Fraser and the late-night show by John Gilroy. Cavett’s writer was Dave Lloyd.

The Dick Cavett Show was also the name of a short-lived radio show.

In the first broadcast of his 90-minute morning show, Cavett had as his first guest, engineer/designer/futurist Buckminster Fuller. The two discussed how politicians would eventually become obsolete through technological advances, while the wide-ranging discussion also included a comment from Fuller that a woman is a baby factory and that a man’s role is to simply press the right button. Later on in the program, Cavett chatted with actress Patricia Neal, who discussed her long rehabilitation from a near-fatal stroke in 1965.

During an interview with Christine Jorgensen, the first widely known person to have a sex reassignment surgery-In this case male-to-female, she walked off the show when she felt offended when Cavett asked her about the status of her romantic life with her “wife”; because she was the only scheduled guest, Cavett spent the rest of that show talking about how he had not meant to offend her.

On Tuesday, August 19, 1969, Jefferson Airplane, Joni Mitchell, and David Crosby and Stephen Stills (of Crosby, Stills, Nash & Young), all appeared on The Dick Cavett Show. It is now often referred to as “The Woodstock Show”, as many of the performers, and Cavett’s audience, came directly from the concert for the taping the afternoon before the show aired. Stephen Stills pointed out the mud from the concert venue still on his pantleg. Jefferson Airplane’s performance “We Can Be Together” marked the first time the word “fuck” was uttered on live television in the US. Joni Mitchell sang “Chelsea Morning“, “Willy”, and “For Free”. Grace Slick kept calling Dick Cavett “Jim” and briefly talked about her school days at Finch College. Stephen Stills performed “4 + 20”. Joni Mitchell sang “The Fiddle and the Drum” a cappella. Jefferson Airplane (with David Crosby) then launched into “Somebody to Love.”  The credits rolled as everybody, aside from Mitchell, partook in an instrumental jam as the audience danced.

Jimi Hendrix was scheduled to join the others but was unable to appear at the afternoon taping that occurred only a few hours after he performed at the late-running festival. Joni Mitchell’s manager, apparently fearing a similar situation that may have prevented her from appearing on The Dick Cavett Show, did not allow her to perform at Woodstock. He considered the Cavett Show too important for her career for her to risk missing the taping.

Mitchell wrote the song “Woodstock” based on descriptions by Graham Nash and from the images she saw on television, as she could not be there in person. The most famous version of the song is by Crosby, Stills, Nash & Young, who recorded it for their Déjà Vu album (1970). It appears in the film Woodstock during the closing credits. Mitchell recorded it for Ladies of the Canyon(1970).

Groucho Marx remarked about the musical Hair, which had just opened and was notorious for its ground-breaking use of explicit nudity: “I was going to go, but I saw myself in the mirror one morning, and I figured, why waste five and a half dollars?

In an interview with Jimi Hendrix, Cavett spoke about Hendrix’s performance of the “Star Spangled Banner” at Woodstock, and called the style “unorthodox”. Jimi commented that the song was “not unorthodox” and that what he played was beautiful. The audience clapped, and Dick blushed.

In this interview, Hendrix modestly downplays his abilities and displays his sense of humor. Perhaps most importantly, he reveals some of his aesthetic ideals and the purpose of his music as he viewed it then when he discussed his concept of the “Electric Church”:

[Music] is getting to be more spiritual than anything now. Pretty soon I believe that they are going to have to rely on music to get some kind of peace of mind or satisfaction—direction, actually—more so than politics, because politics is really on an ego scene…[Politics] is the art of words, which means nothing. So, therefore you have to rely on more of an earthier substance like music or the arts, theater, acting, painting, whatever…[The Electric Church] is a belief that I have. We do use electric guitars. Everything is electrified nowadays. So, therefore the belief comes through electricity to people. That’s why we play so loud. Because it doesn’t actually hit through the eardrums like most groups do nowadays. They say ‘Well, we’re going to play loud too, because they’re playing loud.’ And they’ve got this real shrill sound that’s really hard. We plan for our sound to go inside the soul of the person…and see if they can awaken some sort of thing in their minds, because there are so many sleeping people.

During an interview with singer Judy Collins, which discussed her experiences as a defense witness at the Chicago Seven trial, several of her comments were censored at the direction of the ABC legal department. Collins wrote a protest letter to the Federal Communications Commission (FCC), claiming a violation of her free speech rights and the network license granted to ABC by the FCC. Her protest was denied, with the FCC ruling that a television network could, at its discretion, delete or edit remarks on its programs. Elton Rule, president of ABC Television, noted that in the network’s judgement, “her remarks … were not within the bounds of fair comment.”