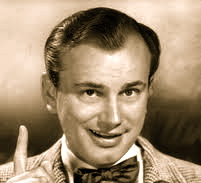 Judy was in great shape, relaxed and very funny. We can also see what a great storyteller she was when she talks about growing up in vaudeville, her days at MGM and her live concerts.  She sings “Little Drops of Rain,” “Paris Is a Lonely Town” and “Mewsette,” from Gay Puree.

Paar (left) with John F. Kennedy on The Tonight Show in 1959

Jack Harold Paar (May 1, 1918 – January 27, 2004) was an American author, radio and television comedian and talk show host, best known for his stint as host of The Tonight Show from 1957 to 1962. Time magazine’s obituary noted that: “His fans would remember him as the fellow who split talk show history into two eras: Before Paar and Below Paar.”

Paar was born in Canton, Ohio, the son of Lillian M. and Howard Paar.  He moved with his family to Jackson, Michigan, 30 miles south of Lansing, as a child. As a child he had a stuttering problem which he conquered.  He contracted tuberculosis when he was 14, and left school at 16. 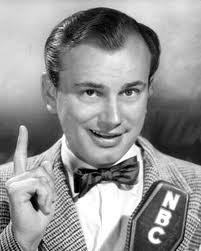 He first worked near home as a radio announcer at WIBM in Jackson and later as a humorous disc jockey at Midwest stations, including WJR in Detroit, WIRE in Indianapolis, WGAR in Cleveland and WBEN in Buffalo. In his book P.S. Jack Paar, he recalled doing utility duty at WGAR in 1938 when Orson Welles broadcast his famous simulated alien invasion, The War of the Worlds over the CBS network (and affiliate WGAR). Attempting to calm possible panicked listeners, Paar announced, “The world is not coming to an end. Trust me. When have I ever lied to you?”

Paar was drafted into the military in 1943 during World War II, interrupting his tenure at host of WBEN’s morning show “The Sun Greeter’s Club” (he opted not to return to the station at war’s end, instead seeking opportunities in network radio and film). He was assigned to the U.S.O in the South Pacific to entertain the troops.  He was a clever, wise cracking master of ceremonies whose impersonations of officers nearly got him into trouble.

After World War II, Paar worked in radio as a fill-in on The Breakfast Club show and appeared as a panelist on the $64 Question.  He got his big break when Jack Benny, who had been impressed by Paar’s U.S.O. performances, suggested that Paar serve as his 1947 summer replacement.  Paar was enough of a hit on Benny’s show that Benny’s sponsor, American Tobacco Company decided to keep him on the air, moving him to ABC for the fall season. Paar later refused American Tobacco’s suggestion that he come up with a weekly running gag or gimmick, saying he “wanted to get away from that kind of old-hat comedy, the kind being practiced by Jack Benny and Fred Allen.”  The show was then terminated, earning Paar an enduring image as a spoiled kid (as Dunning phrased it). A profile of Paar by the Museum of Broadcast Communications suggests that Paar later emulated Benny’s mannerisms. 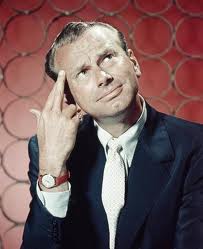 Paar also signed as a contract player for Howard Hughes‘ RKO Pictures in the immediate post war period, appearing as the emcee in the movie Variety Time (1948), a compilation of vaudeville sketches.  He later recalled that RKO producers had trouble figuring out what kind of screen characters he could play, until one of the executives dubbed him, “Kay Kyser, with warmth.” Paar projected a pleasant personality on film, and RKO called him back to emcee another filmed vaudeville show, Footlight Varieties(1951). Paar also appeared in the 1950 film, Walk Softly, Stranger, with Joseph Cotten.  In 1951, he played Marilyn Monroe‘s boyfriend in the 20th Century Fox film, Love Nest.

Paar returned to radio in 1950, hosting the $64 Question for one season, then quitting in a wage dispute in the spring of 1951 after the show’s sponsor pulled out and NBC insisted everyone involved take a pay cut. In 1956, he gave radio one more try, hosting a disc jockey effort, The Jack Paar Show, on ABC. Paar once described this show as “so modest we did it from the basement rumpus room of our house in Bronxville.”

He got his first tastes of television in the early 1950s, appearing as a comic on The Ed Sullivan Show and hosting two game shows, Up To Paar (1952) and Bank on the Stars (1953), before hosting The Morning Show (1954) on CBS. He guest starred twice in 1958 on Polly Bergen‘s short-lived NBC comedy/variety show, The Polly Bergen Show.

NBC asked Paar to succeed Steve Allen as host of The Tonight Show. He hosted the program from 1957 to 1962. At first, the show was called Tonight Starring Jack Paar; after 1959 it was officially known as The Jack Paar Show. Paar was often unpredictable and emotional. When network censors cut a joke about a “water closet” (the British term for a toilet), on February 11, 1960, he received national attention by leaving the show and did not return until three weeks later.  Paar’s emotional nature made the everyday routine of putting together a 105-minute program difficult to continue for long. As a TV Guide item put it, he was “bone tired” of the grind. He signed off the show for the last time on March 29, 1962. 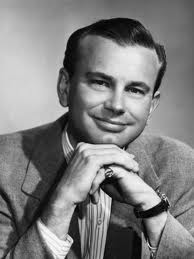 Because NBC did not want to lose Paar to another network, it offered him a Friday prime-time hour, giving him carte blanche on content and format. Paar agreed, deciding on a variation of his late-night format and titling his show, which first aired in the fall of 1962, The Jack Paar Program. The show had a world view, debuting acts from around the globe and showing films from exotic locations; most of the films were made on travels made by guests such as Arthur Godfrey or Paar himself (e.g., several visits with Albert Schweitzer at his compound in Gabon in Central Africa, and Mary Martin at her home in the jungles of Brazil).

Paar showed film clips of the Beatles performing, one month before their famous live appearance on the The Ed Sullivan Show. 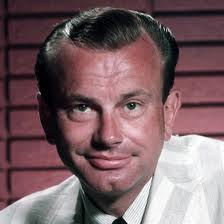 Paar’s prime time show aired for three years, including guests such as Brother Dave Gardner, Peter Ustinov, Lawrence of Arabia‘s brother, Richard Burton, Oscar Levant, Lowell Thomas, Muhammad Ali reciting his poetry to piano accompaniment by Liberace, an occasionally funny Judy Garland, Jonathan Winters, Woody Allen, Bill Cosby (whose nickname for Paar was “The Boss”), Bette Davis, Robert Morley, Cliff Arquette (as Charlie Weaver), Dick Gregory, and many others. The final closing segment of the series, broadcast on June 25, 1965, featured Paar sitting alone on a stool, sharing a discussion that he had with his daughter Randy, who called Paar’s departure a sabbatical. He said that his own field was, though not completely used up, “a little dry recently.” Then he called to his German shepherd, who came to him from the seats of what was, for once, an empty studio, and walked out. (Johnny Carson used this format for his own farewell episode of The Tonight Show in 1992).

Paar continued to appear in occasional specials for the network until 1970.

Paar appears on Dick Cavett’s show to announce his return to television in January, 1973. 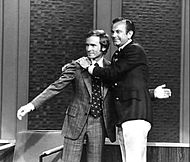 Paar came back to television on a regular basis beginning in January 1973, appearing one week a month as one of several rotating hosts on ABC’s Wide World of Entertainment. Paar claimed it was the most he was willing to appear, and that he would not have appeared at all unless ABC had committed to keeping Dick Cavett, a former writer for Paar, on the air. Paar’s announcer for this series was Peggy Cass, and perhaps its most notable aspect was the national television debut of comic Freddie Prinze. Paar stayed on the show, which was in direct competition with Tonight, for one year before he quit. Dissatisfied with the one-week-per-month formula, he complained that even his own mother did not know when he was on. Paar later expressed discomfort with developments in the television media and once said he had trouble interviewing people dressed in “overalls”, a reference to young rock acts.

In the 1980s and 1990s, Paar made rare guest appearances on Donahue, The Tonight Show(hosted by Johnny Carson and Jay Leno), and Late Night with David Letterman, as well as Charles Grodin‘s CNBC talk show.

In 1984, Paar came out of retirement once again for the Museum of Broadcasting’s “Tribute to Jack Paar”, produced by Kevin Doherty, making two live appearances in New York. This led to a 1986 NBC special featuring Paar, titled Jack Paar Comes Home. The following year, a second special, Jack Paar Is Alive and Well, was broadcast by the network. Both of these specials were largely made up of kinescoped clips used at the tribute from “Tonight” and from Paar’s prime time program, to which he maintained the copyright.

PBS television devoted an edition of the American Masters series to Paar’s career in 1997, and in 2003 revisited the topic with another hour-long examination of the Paar phenomenon, entitled Smart Television. The program featured clips of Paar with guests including Jonathan Winters, Woody Allen, Judy Garland, Bill Cosby (in his first network appearance), Peter Ustinov, Richard Burton, John F. Kennedy, Robert F. Kennedy (in his first interview after his brother’s assassination), Richard Nixon, Barry Goldwater, and many others compiled from the 1950s and 1960s, as well as more recent interviews with people who worked with Paar.

In the spring of 2004, a memorial for Jack Paar was held at The Museum of Television & Radio in New York City. Ron Simon, one of the television and radio curators at the Museum, was host and moderator with appearances and speeches by television talk show host Dick Cavett, TCM host Robert Osborne, and Paar’s daughter, Randy. 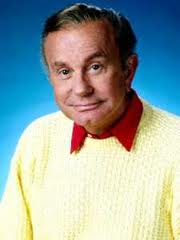 Paar was twice married to his first wife Irene Paar. After divorcing, the couple remarried, only to divorce again. Paar was married to his second wife, Miriam Wagner, for nearly 61 years – from 1943 until his death in 2004. Miriam was a guest on Paar’s 1956–1957 ABC radio show, with their daughter.

Paar’s health declined in the late 1990’s. He died at his Greenwich, Connecticut home on January 27, 2004, with his wife and daughter Randy by his side. He had long been in ill health, having undergone triple-bypass heart surgery in 1998. He also suffered a stroke a year before he died.  His death came just a year before Johnny Carson himself died. He was cremated, and his ashes were given to his family.